CHANDIGARH: Former Chief Justice of India, Justice Adarsh Sein Anand, passed away on Friday morning. He was the 29th CJI and served from 1998 to 2001. 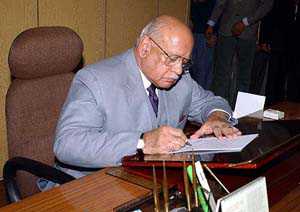 Former Chief Justice of India, Justice Adarsh Sein Anand, passed away on Friday morning. He was the 29th CJI and served from October 10, 1998 to October 31, 2001.

Born on November 1, 1936, Justice Anand had received his early education at Jammu and graduated from the then Jammu and Kashmir University. After completing his bar-at-law in 1964, Justice Anand set up a lucrative practice at the Punjab and Haryana High Court in Chandigarh.

Justice Anand believed in justice to be a constitutional right and insisted that steps were required to be taken for providing inexpensive justice to people. Known for his strictness in judicial matters, Justice Anand was known for his judgments concerning public interest. Justice Anand had refused to relax the time limit set for scrapping of old commercial vehicles, which contributed to the rising pollution levels.

Justice Anand was also known for the exemplary work done as the chairman of National Legal Services Authority and had taken effective steps to establish Lok Adalats in every district of the country. His daughter Munisha Gandhi is a lawyer at the Punjab and Haryana High Court.

He had also authored several books, including ‘The Constitution of Jammu and Kashmir—its Development and Comments’. Justice Anand was awarded the Degree of Doctorate in Law (Honorary) by Lucknow University in 1996; and was unanimously elected the president of the International Institute of Human Rights Society in 1996. He was the first Indian to be honoured with a fellowship of the University College, London, in 1997.

He took over as the Chairperson of the National Human Rights Commission in February 2003. In February 2010, he was appointed as chairman of a five-member committee set up to examine the safety aspects of the Mullaperiyar Dam in Kerala. The panel submitted the report in April 2012.