NEW DELHI:The government has given political clearance to Punjab Congress leader Navjot Singh Sidhu for the Kartarpur corridor inauguration ceremony on the Pakistani side on Saturday. 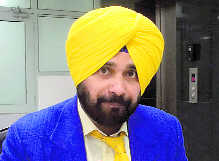 The government has given political clearance to Punjab Congress leader Navjot Singh Sidhu for the Kartarpur corridor inauguration ceremony on the Pakistani side on Saturday.

The clearance came after Sidhu wrote a third letter to External Affairs Minister S Jaishankar in that regard. He had received an invitation followed by a visa for the inaugural ceremony from Pakistan PM Imran Khan. In his letter, Sidhu regretted that “despite repeated reminders, you haven’t responded”.

“I categorically state if the government has any inhibitions, then, as a law-abiding citizen, I will not go. But if you don’t respond to my third letter, I will proceed to Pakistan as millions of Sikh devotees go on eligible visa,” he wrote.