MAIDUGURI (NIGERIA): A suicide bomber killed nearly 10 persons at a crowded market early today in a blast that thundered across the northeastern Nigerian city of Maiduguri, witnesses said. 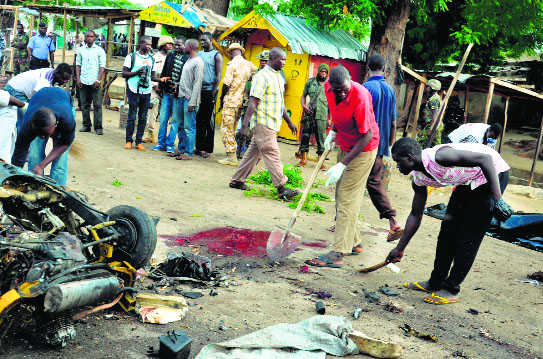 Rescuers work at the scene of an improvised explosive device blast at Gomboru market in northeastern Nigeria on Friday. AFP

A female suicide bomber and Boko Haram gunmen killed 16 persons in Nigeria as the commander of a new multinational force tasked with fighting the Islamists pledged today to crush the insurgency "very soon".

Major General Iliya Abbah's appointment in an Abuja ceremony as chief of the 8,700-strong force came as a woman bomber on a tricycle killed six persons in a busy market in Maiduguri, the largest city in Nigeria's restive northeastern Borno state.

The suicide attack was the latest in a wave of Boko Haram bombings -- often by female bombers -- targeting markets in Nigeria, Chad and Cameroon that have killed and wounded scores in the past month. Boko Haram has kidnapped thousands of civilians, including women and children, with many either forced or indoctrinating into joining the extremists, official say.

"The attack (on the Gamboru) market happened around 6:30 am (local time) as the grocers were arriving," said Babakura Kolo, a vigilante in Maiduguri. — AFP