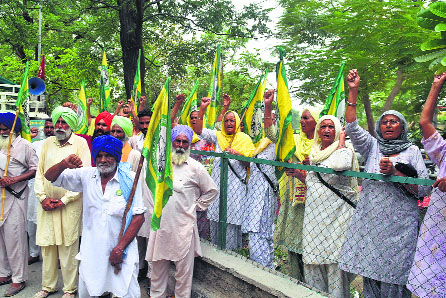 A delegation of BJP workers, headed by district president Vinod Binta, on Monday faced protest from farmers while they were on their way to present a memorandum to the Senior Superintendent of Police (SSP) over the Rajpura incident here.

As the party leaders entered the district administration complex (DAC), farmers blocked the gates. Due to security reasons, the police locked the gates, causing inconvenience to public and officials.

Bhartiya Kisan Union (Ekta Ugrahan) leader Mothu Singh Kotra said: “We have already given our charter of demands to legislators, Members of Parliament, Governor and other prominent decison-makers. Our demands should be addressed first.”

The union leaders said farmers were sitting at the Delhi border seeking repeal of the three contentious agricultural laws enacted by the central government, and nearly 500 farmers had lost their lives during the agitation.

They alleged BJP leaders were trying to hold public meetings despite the fact the Samyukt Kisan Morcha had already decided to protest such meetings across the state. “Farmers were holding peaceful protests, but certain BJP leaders, including Harjit Grewal, were trying to instigate them through their statements,” they added.