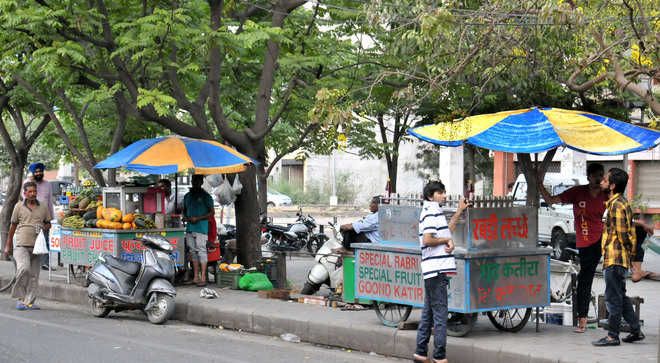 Finally, after one and a half years, alternative vending sites in the city have been approved. The Municipal Corporation had proposed 19 sites for approval to the Chief Architect, UT.

A senior official concerned confirmed, “Close to 15 sites have been approved as some were not found viable. In a day or two, the corporation will receive a communication regarding the approval.”

About 1,500 registered vendors are to be adjusted at these sites.

}The issue has remained stuck for two years. All this while, poor vendors have been forced to pay ‘hafta’ for operating from non-designated sites. This defeats the purpose of the Act. —Ram Milan Gaud, President, Street Vendors’ Union

These vendors are among those who had earlier refused to operate from the sites they were allotted, citing non-viability.

Following intervention of municipal councillors, alternative sites were proposed. The old sites will be discarded.

In view of a number of vending sites remaining vacant and vendors up in arms against shifting to far-off places, the Municipal Corporation had started the procedure to create new sites. Around 2,000 street vendors of the total 4,977 have not taken possession of the vending spaces allotted to them.

At present, most registered vendors faced the ire of Covid as many of them could not pay fee.

Due to this, vending licence of some of them was suspended for three months. They have been requesting fee exemption for the Covid period, but to no avail.