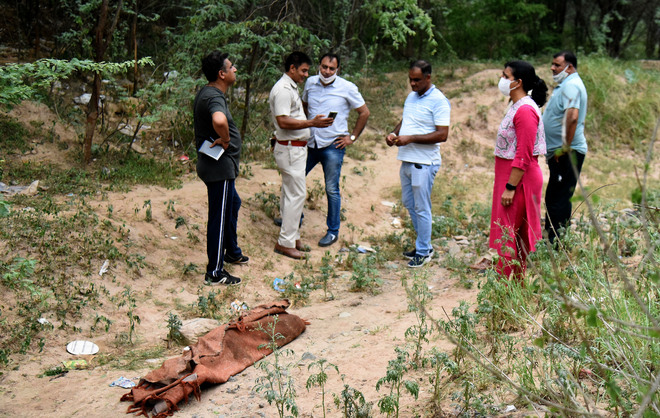 The police inspect the site where the body of the minor girl was found at Sector 23 in Panchkula on Sunday. file photo

Finding it difficult to reach a conclusion in the case pertaining to the murder of a minor girl, the police are still considering her father as the prime suspect who allegedly murdered and sexually assaulted her before committing suicide.

The police had recovered the girl’s body from near the dumping ground in Sector 23 on Sunday while her father was found dead at the railway tracks in Zirakpur on Monday.

The post-mortem report of the girl has confirmed sexual assault before murder by strangulation.

Assistant Commissioner of Police (ACP) Raj Kumar said as per their inquiry involving the wife of the deceased and close family members, along with other circumstantial evidence, they still considered him the prime suspect.

“The girl’s body had 12 injuries. The child also had injuries on private parts. However, it is subject to confirmation of samples from a forensic lab in Madhuban,” a source in the Health Department said.

Deputy Commissioner of Police (DCP) Mohit Handa couldn’t be reached for a comment.

A police officer said they would examine call details of the girl’s father.

On July 18, the police recovered the body of the girl stuck in the bushes on the Bander Ghati stretch. On a complaint filed by a police official who first spotted the body, the police registered an FIR under section 302 (murder) and 201 (destroying) at the Chandimandir police station.