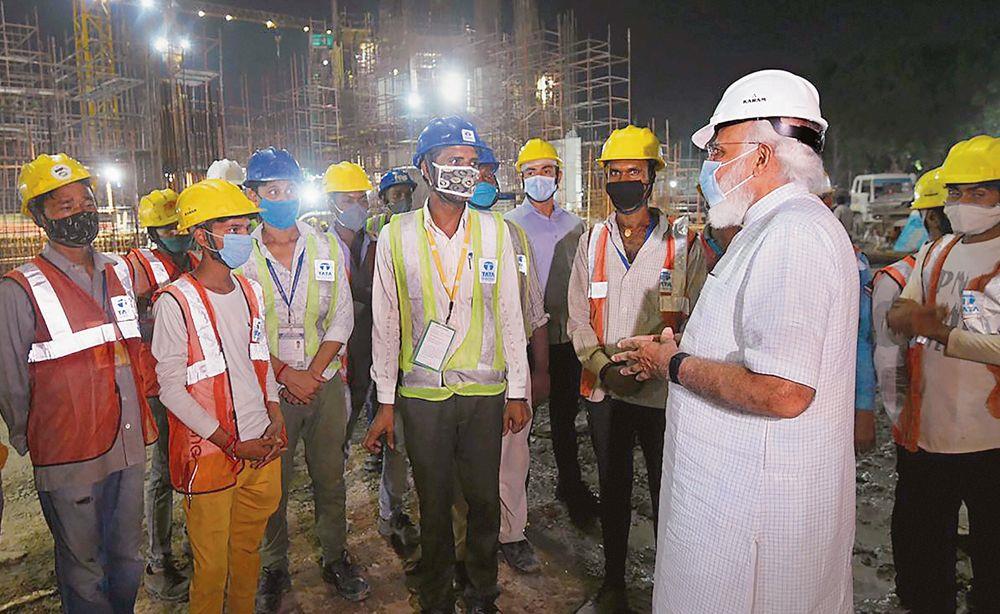 Photo op: Despite his busy schedule, Modi is seen with Army jawans in Kashmir or with construction workers engaged in the Central Vista project. PTI

Amid a largely non-dialogic and personality-centric politics, we have been repeatedly asked to consume diverse images of the all-powerful Prime Minister, and accept that it is Modi who alone matters, and like a messiah, he is endowed with the extraordinary power to dictate the fate of the nation. Hence, in this age of media simulations and propaganda machinery, the spectrum of dramaturgical performances seems to hypnotise the captive audience. Yes, Modi is ‘unpredictable’; from demonetisation to lockdown — his decision would surprise us, shock us, charm us, puzzle us; and we must accept it because he alone understands what is good for us. He is eternally energetic; he doesn’t rest; he only works and thinks of the nation. And hence, despite his busy schedule, he could be seen with the Army jawans in Kashmir, or construction workers engaged in the Central Vista project; and these images must be circulated with the speed of light. And he is all-pervading; the billboards in cities, small towns and even villages remind us time and again that his heart aches for us; he gives us free vaccines; he deposits money in the bank accounts of farmers; and he gives us all sorts of gifts — a temple at Ayodhya, an airport at Noida, and above all, a set of surgical strikes to give a tough lesson to the enemy of the nation. You and I are ‘safe’ because he is there to think for us. None should have any doubt of it!

We must regain our voice, scrutinise the discourse of power, and make our representatives accountable.

Think of it. Can a truly participatory/dialogic/democratic culture be reconciled with this sort of personality cult? Does democracy mean that we remain passive and lose our own voice, and keep waiting for the ‘supreme leader’ to decide our fate? Sometimes, I feel that we need not know the names and portfolios of the Union Cabinet. The reason is that we have been asked to believe that it is only Modi (or his deputy Amit Shah) who matters; and the other ministers exist only for condemning the Opposition, finding ‘Khalistanis’ or the brigade of ‘tukde-tukde gang’ in the farmers’ movement, and organising press conferences to inform us of the ‘stupidity’ of Rahul Gandhi whenever he refers to the Rafale deal controversy, or pathetic handling of the Covid situation.

It is sad that these days, we never say that it is our government; we regard it as ‘Modi government’. And this annihilates the very spirit of democracy. Well, personalities do matter; and even charisma has its role. However, a democratic leader is one who loves to sharpen the art of listening, and respects the creative/critical faculty of ordinary people. A democratic leader is not God; instead, she/he walks with people, and collectively moves towards a better society. In other words, a democratic leader cannot afford to be a narcissist; she/he ought to be humble and dialogic. And this truth cannot be nullified by giving a counter-argument: Indira Gandhi, too, behaved in a similar way!

See the way the historic farmers’ movement — characterised by intellectual clarity, people’s participation, and Gandhian endurance and moral power — was seeking to convey a message: we ought to be listened to; and Modi or his deputies cannot assume that they alone know what is good for the farmers. But then, for almost one year, we witnessed the rigidity of stubbornness on the part of the government resulting from the assertion of Modi’s image: almost like Friedrich Nietzsche’s ‘Superman’ driven by the will to power! He alone knows what is good for Indian agriculture and our farmers; he is, therefore, ‘firm’ and ‘determined’; and those who are against these farm laws are either stupid or misdirected. The irony is that even when he apologised, felt some shortcomings in his ‘tapasya’, and decided to repeal the farm laws with his characteristic monologue (no consultation with the farmers, no dialogue with the Opposition leaders, no parliamentary discussion, and just another dramatic surprise), he was not willing to accept that he was wrong; in fact, he thought that somehow, despite his best efforts, he could not convince a section of farmers of the efficacy of these three laws. Possibly, one’s egotistic pride does not wither away so easily.

We need not be surprised that if even this gesture of Modi is now used to construct yet another image of the ultimate messiah — ‘compassionate’/ ‘pro-farmer’ Modi! And the billboards throughout the country might remind us that we must thank Modi for his compassion. Furthermore, the propaganda machinery has already begun to popularise the idea that Modi withdrew the farm laws because the ‘anti-national’ conspirators were trying to exploit the situation, and cause severe damage to the country. Nothing is more important to Modi than the interest of the nation! What else these ‘shiny’ anchors of toxic television channels could do as they were never tired of castigating and demonising this historic movement? Now they must evolve their ways to handle Modi’s unpredictability (or, is it a masterstroke for winning the elections in Uttar Pradesh?).

Our existence should not depend on the mercy or compassion of the messiah. Instead, it requires the spirit of a creatively nuanced critical thinking. You and I must recover our agency, regain our voice, scrutinise the discourse of power, and make our representatives accountable: they are not our masters; they ought to be humble; and they must listen to us. Possibly, amid the cult of narcissism, the perseverance of innumerable unknown farmers arouses our hope in this democratic possibility.