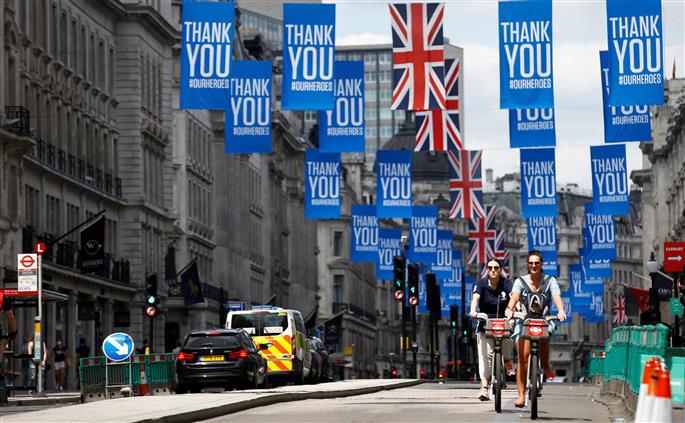 People ride bikes underneath Union Jack flags and banners as restrictions are eased following the outbreak of the coronavirus disease in Regent Street, London. Reuters

UK Cabinet Office Minister Michael Gove on Sunday called for a more “common sense” approach to face coverings in public places rather than making them compulsory as Britain emerges from the coronavirus lockdown.

The senior minister in the Boris Johnson-led government told the BBC that wearing masks in enclosed areas such as shops should be seen as “basic good manners” but did not believe it necessary to make it mandatory.

“I think that it is basic good manners, courtesy and consideration, to wear a face mask if you are, for example, in a shop,” said Gove.

“I don’t think mandatory, no, but I would encourage people to wear face masks when they are inside, in an environment where they are likely to be mixing with others and where the ventilation may not be as good as it might,” he said.

“Now of course the government at all times does look at the emerging evidence about what the best way to control the disease is.

“If necessary, and if tough measures are required and as we have seen in Leicester, obviously a very different situation, then tough measures will be taken. But on the whole... it’s always best to trust people’s common sense,” he added.

His intervention came as Johnson had previously indicated that the government may be considering tougher rules on face coverings, which are currently compulsory only on public transport in England, Scotland and Northern Ireland.

In Scotland, they are also mandatory in shops and Wales recommends masks but they are not compulsory.

“I do think we need to be stricter in insisting people wear face coverings in confined spaces where they are meeting people they don’t normally meet. We are looking at ways of making sure that people really do have face coverings in shops, for instance, where there is a risk of transmission,” Johnson had said on Friday.

The Opposition Labour Party has sought more clarity on the issue and Shadow Cabinet Office Minister Rachel Reeves said the party would support mandatory face coverings for shops, as it “would inspire greater confidence and might encourage more people to go out and spend money”.

“I think people are increasingly wearing them but some greater clarity from the government about that, I think, would be helpful,” she said.

Many leading scientists have called for a more compulsory approach to face coverings to curb the spread of the coronavirus and prevent a feared second wave in the UK.

Earlier this week, Nobel laureate Venkatraman Ramakrishnan had warned that the UK was lagging behind other countries in the mandatory use of face masks to prevent the rapid spread of coronavirus.

“The UK is way behind many countries in terms of wearing masks and clear policies and guidelines about mask wearing for the public. The public have taken to hand washing and distancing but remain sceptical about face coverings,” said Prof. Venki, the President of the Royal Society.

“It used to be quite normal to have quite a few drinks and drive home, and it also used to be normal to drive without seatbelts. Today both of those would be considered anti-social, and not wearing face coverings in public should be regarded in the same way,” he said. PTI