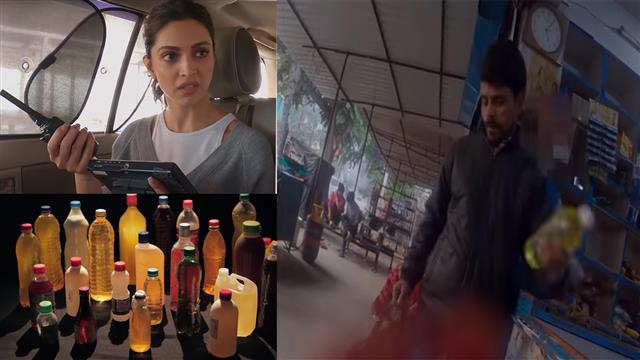 In a ‘social experiment’ with the crew of her film, ‘Chhapaak’, Deepika held a sting operation of sorts to check how easily a few shopkeepers would sell acid without asking for an ID from a buyer.

Members of Deepika's team dressed and acted as regular professionals, like a plumber, a businessman, a student, a drunkard, even a housewife and a street goon, to conduct the experiment.

The actress, on the other hand, watched them buy the acid bottles from her car.

The video starts with Deepika saying: "If someone proposes to you and you say no, raise your voice when someone harasses you, or if you fight for your rights...and someone throws acid on your face."

“Agar ye bikta nahi toh phikta nahi (It wouldn’t get thrown if it wouldn’t sell),” she says in the video.

Many actors insisted with the shopkeepers that they want the strongest acid ‘which can burn somebody’s skin’. While many shopkeepers didn’t enquire much about the buyer’s intention, only one asked for the buyer’s ID proof before he could sell him acid.

At the end of the video, Deepika reveals that her team managed to buy 24 bottles of acid in just a day. This was after the Supreme Court had ordered strict regulations on the sale of acid.

“I think not just shopkeepers, but it’s also our responsibility that if we ever see anyone illegally buy or sell acid, we should immediately inform the police,” Deepika says in the video.

Deepika plays the lead in ‘Chhapaak’, which is based on the story of real life acid attack survivor Laxmi Aggarwal. The film is directed by Meghna Gulzar and released on Friday, January 10.