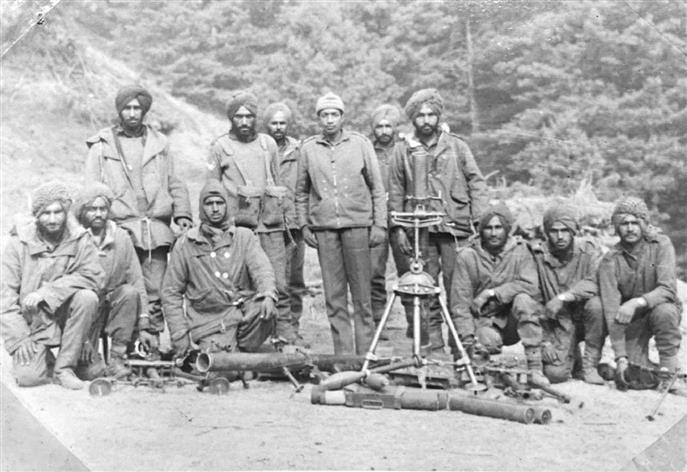 The versatility of the Indian Army to battle in varied terrain conditions was witnessed in all sectors during the 1971 war. Successful offensive actions were carried out over riverine terrain in the East, the plains of Punjab, the high-altitude areas in the North and in the shifting sands of Thar desert. There were two outstanding actions, one in Lipa valley (PoK), and another at Purbut Ali (Sindh).

As a rule, an attacking force is numerically much superior than the defenders and a highly motivated outfit, led by committed commanders, can achieve wonders. One such gallant team was that of Lt Col (later Maj Gen) Sam Chengapa, officers and all ranks of 9 Sikh. The essence of their offensive operations was unconventional tactics; this led to repeated surprises, with speed ensuring maintenance of momentum.

Artillery support was limited to a battery of 4.2” mortars, a rather vintage weapon. The enemy force comprised the 16 PoK Battalion and two companies of Tochi Scouts, supported with artillery. Deployed on the lofty heights of Shamsha Bari Ridge, 9 Sikh crossed the ceasefire line on the night of December 3-4 and swept down 2,000 feet into Lipa valley in Pakistan-occupied Kashmir. The terrain was extremely hazardous and the weather inhospitable. By the early hours of December 4, the enemy post of Thanda Pani was captured by a company under Maj KC Bali; it was the first of a series of objectives to be achieved.

The commandos, led by Capt Karam Singh, had cut off this post, then creeped forward to detect the next enemy position at Kaiyan. Time was of the essence and 36 hours later, the next attack went in to capture Kaiyan by the early hours of December 6. Here, a .30 Browning MMG was pulled out of a bunker by Subedar Swaran Singh; the enemy left behind rifles, plenty of ammunition and stores, 12 dead and three prisoners.

The enemy counter-attacked, but confronted with the resolve of 2/Lt Pushpinder (Sena Medal), were beaten back. The enemy sniped heavily from the surrounding heights, and this was addressed. The uphill attack faced stiff resistance, progress was slow and it was only by December 10 that the complex was captured.

While this was underway, on December 8, another company under Maj Balu Ram, self-contained for ammunition and rations for six days (December 8-14), infiltrated undetected 20 km deep into enemy turf. They successfully blocked the only road from Muzaffarabad over Brithawari Gali to Lipa valley for two days. Their exfiltration was also successful; they suffered no casualty, but brought back one prisoner. It was an outstanding feat by any military standard. Then, on the night of December 15-16, two companies under the command of Maj Hardul Singh and Maj Jai Narain maneuvered to the enemy’s rear. On December 16 by day, they reached within 50 metres of the objective (Three Pimples) undetected, and without a second thought an attack was driven in at 1400 hours. A perplexed enemy tried to give battle but were forced to retreat, leaving behind 18 dead, two prisoners, four 3” mortars, two LMGs, other weapons and ammunition.

When the ceasefire was announced, 9 Sikh had single-handedly captured 46 square km of PoK — a true example of surprise, initiative, speed and boldness, fulfilling their motto, ‘Sir Qaim, Jang Daim’ (Till the Head is Firm, Battle will be won)!

10 Sikh under Lt Col KC Kalley was tasked to lead the advance on the Axis Khokhropar-Naya Chor in Rajasthan, with a mission to capture Purbut Ali, 65 km beyond the IB, and then Naya Chor (Sindh), another 5 km ahead of Purbut Ali. Before doing so, the forward Pakistan defences had to be cleared. As the artillery and Air Force pulverised Ghazi Camp and Khokhropar, troops of 10 Sikh dug down close to the border. As night fell on December 4, a silent attack was underway to capture Ghazi Camp by dawn. By 0830 hours, the advance had resumed. Though winter, the sun was harsh, drinking water was rationed, the guns had to be dragged through long patches of soft sand, but the troops pressed forward. Khokhropar town fell before noon.

The advance then encountered a strong enemy screen position at Apex Hill. Reconnaissance and planning took time, and the attack was launched on the night of December 10-11 by a company led by Maj Amrik Singh. Apex Hill fell after some resistance.

The main defences of Purbut Ali soon rose over the horizon; concrete bunkers were distinct and 10 Sikh came under severe artillery fire. The defences were well prepared, coordinated and covered by artillery, definitely a hard nut to crack. This necessitated gaining more details. Patrolling and probing actions confirmed a deep minefield ahead of the defences and exact locations of many embattlements.

On December 13, two battalions covered by a moving barrage of artillery fire were launched. Two companies of 10 Sikh were part of the first wave of attack, one of these was under the command of Maj Amrik Singh (Vir Chakra): “His courageous leadership was enough of a motivator and added much vigour and determination among the men. Though wounded, he refused evacuation; the battle with the enemy was in close quarters and it was only after the final success that he allowed himself to be evacuated.”

Once the initial foothold was achieved, the momentum of the push was heavy. It gave the enemy no respite and the final blows were delivered. The enemy resistance was dogged. At one stage, Subedar Gurcharan Singh (Sena Medal) observed that the enemy was building up for a counter-attack; he rose to the occasion, “collected his men and charged at the enemy, who were totally taken aback by this unexpected move. They broke up, but the Subedar leading the attack received severe injury and succumbed.”

Another two young soldiers, Naik Gurjant Singh and Sepoy Mohan Singh (both Vir Chakra), were also true to call, “as one scuffled with the enemy in hand-to-hand combat, killing a few, the other charged a Heavy Machine Gun (HMG), killed its crew and neutralised the HMG. Both in valour laid down their life.”

After a heavy encounter, Purbut Ali lay at the feet of our troops, but the cost was heavy. Casualties had occurred during the assault through the minefield. Capt NK Parmar, the Regimental Medical Officer, rose to the occasion and even before the enemy artillery fire had lifted, “with his team of stretcher bearers, rushed forward to evacuate the many wounded. One jawan with his ankle blown up was lying deep in the minefield, but unmindful of his personal safety and no safe lane, the RMO crossed over to him, lifted him on his back and brought him back safely. Many lives were thus saved.”

Naya Chor, the final objective, was still 5 km ahead, but as the ceasefire came about, the guns had to fall silent. The gains made across the IB by the guts and blood of the men had to be returned. The pullback from Purbut Ali started on February 27, 1972. By early March, all the troops were back on Indian soil. In J&K (PoK), the ingress was into our own territory illegally occupied by Pakistan, so there was no question of a pullback. The Indian flag continues to flutter over the 46 sq km area that was captured.