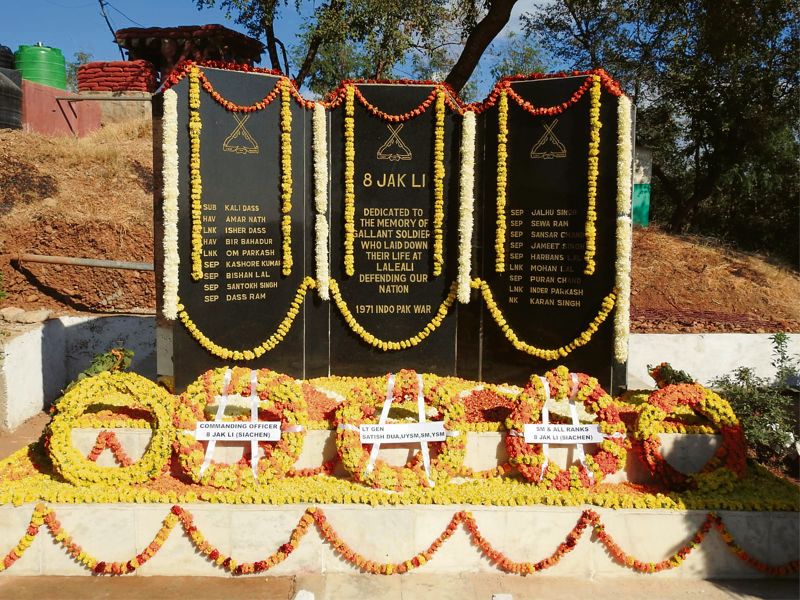 Images from the 8 J&K War Memorial, which has the name of Subedar Kali Das.

Cease! Must men kill and die?

Cease! Drain not to its dregs the urn of bitter prophesy,

The world is weary of the past,

UNFORTUNATE, but it is a well-established military axiom that many an act of supreme valour performed in the face of the enemy, and beyond the call of duty, often go unrewarded than the fewer and indeed meritorious which gain universal commemoration for posterity.

Now, on the occasion of the Swarnim Vijay Diwas of the 1971 war, as India rejoices and proudly recalls the gallant acts of her bravehearts, my mind goes back to one unsung but iconic “bravest of the braves” who, unmindful of the consequences, simply refused to falter from his Oath of Allegiance, namely, “Main Bhagwan ko sakshi man kar shapath leta hoon ki… aagya ka palan karunga isme chahe mujhe apna jeewan bhi balidan karna parhe.”

And for sure, there are moments even during the most lethal phases of a battle when a son of the soil chooses to far exceed his solemn oath of “Aagya ka palan karunga”, as was the case of Subedar Kali Das of 8 J&K Militia Battalion, who on December 8, 1971, of his free volition, volunteered to stay back and single-handedly kept enemy hindrance sufficiently subdued, so as to enable the withdrawal of his Company to a depth locality under broad daylight, on the “killing fields” of the Chhamb battlefield.

8 J&K had been tasked to hold with one Company each the dominating hillocks, Point 707 and Laleali, which provided an excellent vision of Pakistani army dispositions across the LoC, and another Company on Nathua Tibba, a hillock echeloned to the rear, while the Battalion Headquarters with the fourth Company were deployed on the relatively open terrain at Dewa, the start point of a motorable track leading to Akhnoor. As the battle unfolded on the eve of December 3, 8 J&K emerged among the chosen favourites of Pakistan’s artillery shelling reprisals, followed by the opening infantry assaults, simultaneously on 707 and Laleali from 2020 hours to 2140 hours. But for the two bunkers dislodged at 707, the enemy paid a very heavy price in dead and wounded. And in any case, by 0300 hours of December 4, even those two bunkers were back with 8 J&K after a spirited local counter-attack.

Irked by the 8 J&K’s stubborn defiance right up to December 6, Laleali was next attacked by a battalion, with both sides exchanging blow for blow till the two opposing Company Commanders (Maj Virender Kumar and Major Farook Ali) came face to face such that “of the two, one had to die; fortunately, Viroo lives to fight again”. Viroo was awarded the Vir Chakra and so also Farook its equivalent, posthumously.

Piqued by the stalemate, on December 7, Pakistan shifted focus on to Dewa with tanks supporting infantry assaults, preceded by intense artillery fire assaults, again and yet again. Eventually, by 1445 hours on December 8, Dewa defences had become untenable and 8 J&K were ordered to withdraw to a locality in depth. However, as the Pakistanis were at last riding the crest of the winning wave, it was essential to keep them engaged with automatic fire in order to facilitate self-extrication from Dewa right under the enemy’s nose and in broad daylight visibility conditions.

This is when Subedar Kali Das volunteered to put up a lone “Last Stand” at Dewa. He exchanged his stengun for an LMG, commandeered six to eight magazines of ammunition, crawled into a bunker best suited for LMG trajectory and kept the enemy at bay till he was shot dead and his comrades by then, well out of harm’s way!

After the ceasefire, his body in a coffin was handed over to 8 J&K by the Pakistanis with a citation which read,

“This is the body of Subedar Kali Das of 8 J&K Militia. He died while fighting very bravely in Area Tank ahead of Dewa Post. He did not leave his trench till the last breath. After inflicting heavy casualties, he became a target of a Ghazi’s bullet. His badges of rank are available. A piece of paper was found in his pocket, revealing his name.”

Despite such high praise from the enemy, Subedar Kali Das’ act of valour went unrecognised.

“To every man upon this earth

And how can man die better

For the ashes of his fathers

And the temples of his Gods” — Horatius

It was not a one-off gallant performance by the 8 J&K Battalion, but as I was to learn later, it was a habit with them! I had the proud privilege of having them with me in the Division I commanded in the late 1980s and had a cup of tea with the soft-spoken, unpretentious Naib Subedar Bana Singh, PVC, who had cut his milk teeth with a few months’ service at Laleali, under the tutelage of Viroo, who “lives to fight again”. The Battalion has the most enviable tally for acts of valour: a PVC, three Ashok Chakras, 10 Maha Vir Chakras, 34 Vir Chakras, four Shaurya Chakras and 56 Sena Medals. And at the individual level, their Naib Subedar Chuni Lal was one of the most decorated of the Indian Army: Ashok Chakra (posthumous), Vir Chakra and Sena Medal.

Subedar Kali Das was not a greenhorn, but a seasoned veteran of battles fought in the 1965 war, as also a few successful counter-insurgency and several counter-infiltration missions on the LoC under his belt and would have known full well the consequences that his single-handed “Last Stand” was an assured, self-assigned death warrant. So what was his motive? The only answer which comes to my mind is what Charles Masson, writing the definitive history of the Indian Army, had summed up as simply “A Matter of Honour”! No more, no less.

So let us rise and raise a salute to Subedar Kali Das, the unsung ‘Maha Vir’.