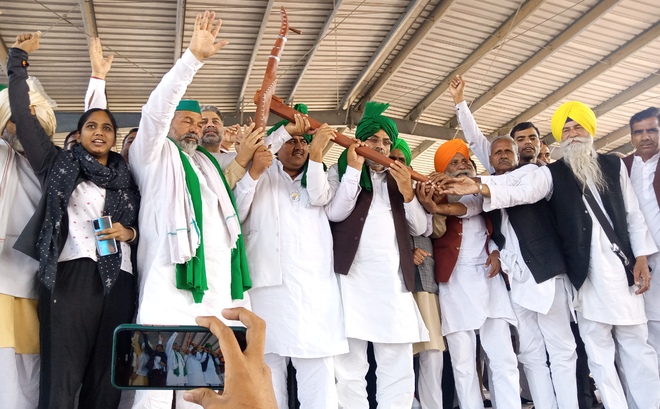 Farmer leaders at a ‘mahapanchayat’ at Kharkhoda in Sonepat district on Monday. Tribune photo

Bharatiya Kisan Union (BKU) national spokesperson Rakesh Tikait on Monday said farmers at the Delhi borders would not go back home till the three farm laws were repealed.

Two booked for firing at leader

Tikait was addressing a “kisan mahapanchayat” at Kharkhoda. He said all khaps and farmers trusted 40 farmer leaders, who would move across the country over the three farm laws.

Taking a dig at Union Agriculture Minister Narendra Singh Tomar over his remarks, he said, “The minister says mere gathering of crowds does not lead to repeal of the three farm laws. When crowds gather, the government gets changed.”

Appealing to farmers not to destroy their produce, Tikait said the time had not come yet. The stir would go on and farmers would work in their fields simultaneously, he asserted. “This agitation is not of farmers alone, but of the poor, daily wagers and other sections of society as well,” he added.

Gurnam Singh Charuni said lakhs of farmers had died by suicide due to debt, but they had never heard of a capitalist going to jail or killing himself for failing to pay debt.

“The time has come to demand a change in policies,” he said, adding they were ready to continue the movement till 2024 if need be. Farmer leaders Baldev Singh Sirsa, Jagjeet Singh Dallewal, Yudhvir Singh and Abhimanyu Kohar addressed the gathering.