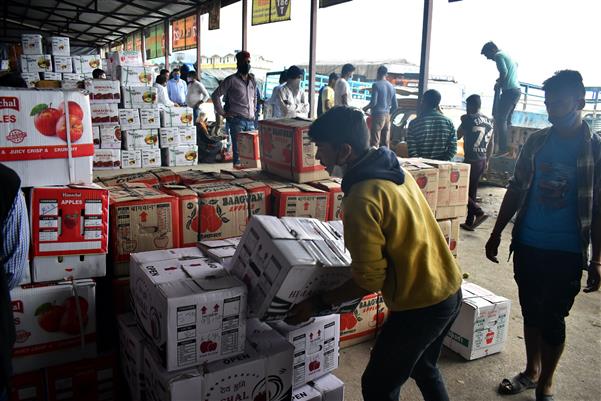 Sanyukt Kisan Manch is expecting nearly 10,000 apple growers to participate in the protest march in Shimla tomorrow over the rising input costs and other challenges the apple industry is facing over the last few years. The march will start from Sanjauli at 10:30 am and culminate in the gherao of the Secretariat.

“Even through growers are harvesting their produce at this time, we are still expecting about 10,000 growers at the protest,” said Harish Chauhan, convener of the Sanyukt Kisan Manch. Weather, however, holds the key. There is a forecast of heavy rainfall in Shimla and a few other districts over the next couple of days and this could dissuade some growers from travelling to Shimla for the protest.

Incidentally, this is the first major anti-government protest by the apple growers in over 30 years. The apple growers had last launched a major agitation way back in 1990 against the then BJP government led by Shanta Kumar.

“Apple growers and farmers had been busy working in their orchards and fields. We have been forced by the government’s anti-apple policies to launch this agitation,” said Chauhan. “Having raised our demands before the government for over a year without any success, we are now ready for a decisive fight,” he said.

Meanwhile, the veterans are readying themselves to join the protest. “We had taken to the streets in 1990 against the government for its anti-apple policies. The apple industry is facing a bigger crisis this time, so we have no choice but to hit the street,” said Krishan Lal, a 70-year-old orchardist from Kotkhai.

“The apple growers had managed to force the government to roll back their anti-apple policies in 1990 and in 1987 as well. We are hoping the result of this agitation would be the same,” said Lokinder Bisht, president of the Progressive Growers Association.

Meanwhile, the AAP has extended its support for the agitation. “We will appeal to our members to join the protest without their caps and flags,” said Surjeet Thakur, state AAP president in Shimla today.

What they are demanding?