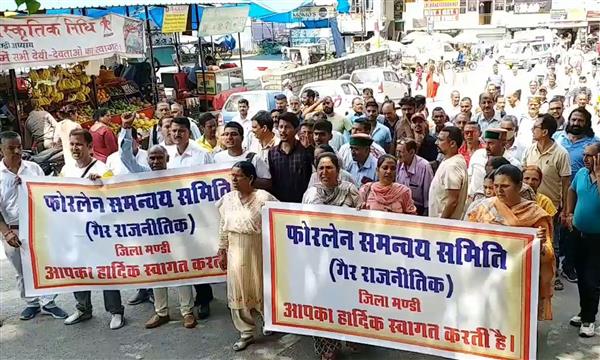 Members of the families affected by the four-laning project of Pathankot-Mandi NH hold a protest in Mandi. Tribune Photo

People affected by the Mandi-Pathankot four-lane road project held a protest march here today against the state government and the National Highways Authority of India (NHAI).

The protesters raised slogans against the state government and the NHAI. They said that the NHAI and the government were calculating the value of agricultural land coming under the road project quite low.

They claimed that the current market value of land between Narla and Bijni on this four-lane project was quite high. They later submitted a memorandum regarding their demands to the state government through the Mandi Deputy Commissioner.

Virender Singh Thakur, coordinator of the Four-lane Sangharsh Samiti, said, “We have been demanding adequate compensation for our land. We urge Chief Minister Jai Ram Thakur to look into the matter and do the needful. The protest will be intensified if the government does not pay heed to our demands.”