Himachal Pradesh elections: Congress secures 43.9 per cent vote share, BJP close behind with 43 per cent, AAP gets only 1.1 per cent : The Tribune India

Despite getting 43 per cent vote share, the BJP could only manage to win 25 seats 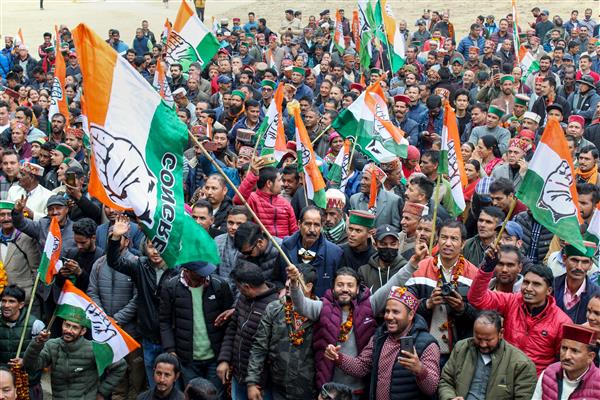 Himachal Pradesh has not voted any incumbent government back to power since 1985. PTI

The Congress secured 43.90 per cent vote share as it wrested Himachal Pradesh from the BJP, winning 40 seats in the 68-member Assembly in the hill state which maintained its tradition of voting incumbent government out of power since 1985.

Despite getting 43 per cent vote share, the BJP could only manage to win 25 seats, with many segments witnessing lower victory margins.

Three Independents also emerged victorious in the assembly polls, results for which were declared on Thursday.

The vote share was up for the Congress as against previous assembly elections.

The BJP and the Congress contested on all 68 constituencies, while the Aam Aadmi Party (AAP) fielded its candidates on 67 seats, the Bahujan Samaj Party (BSP) on 53 and the Communist Party of India-Marxist (CPI-M) on 11 seats.

The AAP failed to open its account and the CPI-M also did not win any seat while its sitting MLA from Theog also lost.

The gap of less than one per cent between Congress and BJP vote shares was highlighted by both Prime Minister Narendra Modi and BJP chief J P Nadda in their address to party workers in Delhi after the poll results were declared.

The BJP had given the slogan of "Raj nahin, riwaz badlega", which translates to "the convention will change, not the government", but failed to buck the trend. Himachal Pradesh has not voted any incumbent government back to power since 1985.

Nadda thanked the BJP workers for their hard work in his home state Himachal Pradesh and asserted "raj may have changed, but 'riwaz' also changed as there was a gap of less than 1 per cent in the vote share of the top two parties".

Congress leader Rahul Gandhi thanked the people of Himachal Pradesh for the "decisive win" of his party and assured them that every promise made by the party will be fulfilled.

Conceding defeat, Chief Minister Jairam Thakur said he respected the mandate of the people and submitted his resignation to the governor.