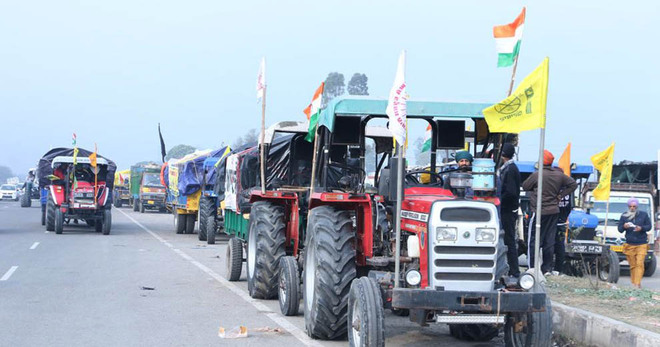 Farmers from the Doaba region take out a tractor march in Phagwara on Saturday. Tribune Photo: Malkiat Singh

With tractors, jeeps and cars taking over roads and highways, thousands of farmers from the region left for the Singhu border on Saturday to participate in the ‘tractor march’ to be observed on Republic Day.

Flaunting banners of the Bharatiya Kisan Union (BKU) with slogans such as ‘No Farmers, No Food, No Future’ and ‘Repeal black laws’, around 6,000-7,000 farmers and youth under the banner of BKU Doaba first assembled at Phagwara to show massive strength and unity. Apart from organising the langar, the fuel tanks of farmers’ tractors were also filled with diesel by the union workers.

After decorating their vehicles with flags and banners, farmers were seen storing ration and other essential items for the next 15 days.

Manjit Singh, a farmer from Phagwara, said, they were heading to the national capital to further intensify the ongoing protest against the three farm laws.

“No matter what, we will enter the national capital. With our tractors, we are ready to endure all pain. We have also placed iron rods around the tractors to prevent them from damage during the protest march. We want to show the government that apart from farmers on the outskirts of Delhi, a sea of supporters from across the state will also enter Delhi on January 26. We are warning the government to withdraw the controversial laws, as it’s just the ‘rehearsal’ of the main show,” Manjit said.

Satnam Singh Sahni, general secretary of the union, said a large convoy of tractors from Doaba has been sent to the Haryana-Delhi border. Addressing the young brigade of farmers, he said: “The tractor march is being organised to just pressurise the government to not consider the farmers illiterate. We are very well aware of our rights. It seems like the Prime Minister cannot see us or hear us despite having so much strength. He has forgotten that we are the ones who have voted him to power. Through the tractor march, we would like to make an appeal to the government to take back the laws.”

Accompanying him, Gurpal Singh, a farmer from Phagwara said: “The tractor march will be observed just to make them hear our voices. We are an extremely peaceful lot and we have no intention of getting into face-offs with any person or authority of any kind. However, we won’t allow anyone to play with our rights and the associated sentiments.”