Smoke billows from the burning waste at the Wariana dump, popularly known as the garbage mountain of Jalandhar. Sarabjit Singh

In 2017, a bio-mining project was planned to manage and process the waste at Wariana dump. A detailed report of its importance was prepared too. Cut to 2022, the much-talked about project is yet to take off and the garbage mound at the dump has only grown bigger all this while.

Moving at a snail’s pace

At present, there is 8 lakh cubic metric waste at the site and a hill-like structure of garbage oversees the city. The overflowing waste is spewing toxins into the air. People living nearby areas at the Wariana dump site are stressed and depressed. They are surviving amidst pollution and diseases.

The city generates above 450 tonne of garbage every day. Now, even other small dump sites are filled, and the lifting of the garbage is not getting done properly. To tackle the abovementioned problems, a bio-mining project was to be implemented under the Smart City project. However, only a shed is getting constructed at the site, and that too has not got completed. 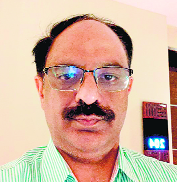 Penalty has been imposed on the company that has been awarded the bio-mining project. We are hoping that the work will be completed soon.

Since the announcement of the project, several changes have been made to it. Tenders were floated a number of times before it was finally awarded to a company in October, 2021. The cost of the project is Rs 32.11 crore

and it was scheduled to get completed in six months, i.e. in April this year. But 10 months have passed since the project was given to the company, it is still incomplete.

Sources said the shed and machinery for bio-mining was supposed to be made available in April, and it was decided that the processing would start from May, but nothing happened. The company is told to complete the processing of 8 lakh cubic metric waste in two years, i.e. 2024.

When the company failed to complete any of the work, three notices were sent to them by the corporation. A Project Monitoring Committee (PMC) has also got formed to expedite the process. Now Municipal Corporation Commissioner Devinder Singh has asked the company to complete the first phase till August 31.

Smart City officials informed that now a penalty will be imposed on the company if they fail to deliver. “If they don’t complete the project by September, 2 per cent of the amount will be imposed as penalty on them per month,” officials further added.