From researcher at premier astronomical research observatory in New Zealand to a lecturer at University of Canterbury, Dr Pal’s journey has been all about reaching for stars 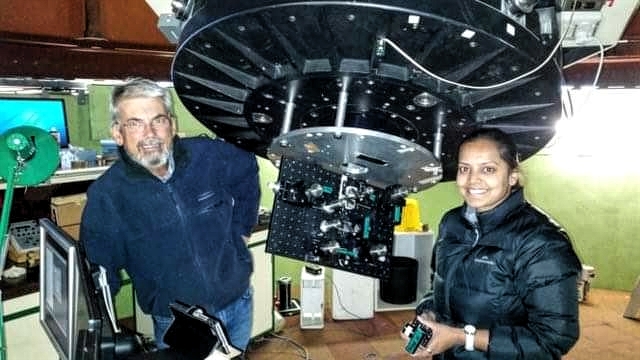 She has conducted astronomical research at an observatory at Lake Tekapo and now is an assistant lecturer at University of Canterbury.

City’s Dr Saloni Pal (35) stands out as a shining example of women empowerment. Six years after her wedding in Jalandhar, she is setting precedents in science and research. She absolutely admits that she achieved her goal due to great family support otherwise it was nearly impossible.

Hailing from Jalandhar Cantt and married at Sofi Pind in the district, she left to for further studies with her husband Aman Samrat in 2015. Today, she is an ace scientist having presented papers for various prestigious conferences and symposiums. A former student of NIT Jalandhar, Dr Pal conducted her novel PhD research on ‘multi-scale methods for deconvolution from wavefront sensing’ under the supervision of assistant professor Steve Weddell of the university in New Zealand.

Her research method focused on how to improve the quality of astronomical images by using software approach. Prior to this, she had completed her master’s degree in signal and image processing from Dr BR Ambedkar National Institute of Technology, Jalandhar.

Buoyed by resources and support offered by the varsity during her PhD journey and complete support from her in-laws family. For her extensive research, she performed multiple observational runs to collect field data at University of Canterbury Mount John Observatory (UCMJO) based at the Lake Tekapo in Mackenzie Basin in South Island. The UCMJO is the continent’s premier astronomical research observatory. In addition, university-based adaptive optics laboratory was also a great resource for her to perform experiments and collect data in a controlled environment. Soon after completion of her PhD, she was appointed assistant lecturer at the university.

Her parents and in-laws’ family members are proud as she is the first female in family who reached such levels of education. Father-in-law Gurmeet Lal, a Sofi Pind resident, said, “Right after her wedding she expressed the aspiration for higher studies. Our son had already gone to New Zealand in 2010. In 2015 both of them left for the ‘land of the long white cloud’. In little time, she has established herself as a great scientist. She spent years researching at the secluded observatory. We are lucky to have such a genius in the family.”

Dr Pal’s husband also works in New Zealand and the couple has a son Biraaj Samrat, who was born during the course of her doctorate research.

While pursuing her doctorate, she presented her novel work at the international conferences and symposiums she attended time to time – Optical Society Of America (OSA), 2015, in Heidelberg (Germany), Image and Vision Computing New Zealand (IVCNZ), 2017 and 2018, in New Zealand, Society of Photo-Optical Instrumentation Engineers (SPIE), 2018, Texas, and a symposium organised at Australian Defence Academy, Canberra, to name a few.

With research work done and thesis submitted in February, soon she’ll get her hands on the PhD doctorate degree on April 14. She expressed happiness at the importance of the day which is the birth anniversary of Dr BR Ambedkar and she is highly influenced by his work to promote education, human rights and women welfare.