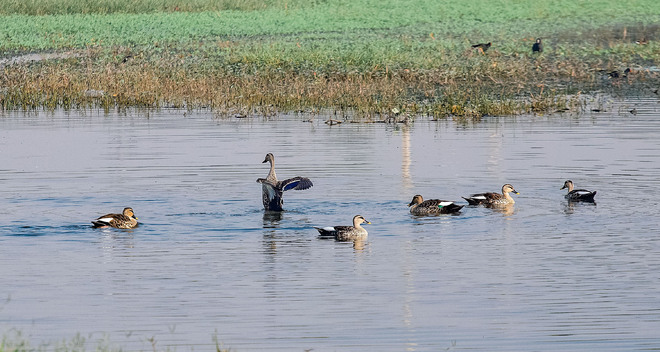 A detailed plan is being devised by the district administration to revive the Kanjli Wetland yet again as a tourist spot.

A detailed plan is being devised by the district administration to revive Kanjli Wetland yet again as a tourist spot. A meeting in this regard was held at the Deputy Commissioner Office on October 28. While the basic infrastructure at the wetland will be upgraded, a ‘detailed project report’ on the wetland has been ordered within a week to promote activities and various spaces to revive tourism. These shall include boating, walk ways and restaurant, among other amenities. At the Kanjli Wetland Maintenance and Development Society meet, Deputy Commissioner Deepti Uppal said the International Tourist Centre of Kapurthala will see an uplift yet again. The Society headed by ADC Rahul Chaba was asked to explore options for a café, restaurant, 3-km long walk way and boating. The functionaries of the drains, forest, wildlife protection, fisheries, local bodies and Tourism Department were asked to complete the respective projects within a given time frame.

A voter awareness camp was held at Naroor village in Kapurthala on Thursday. The camp was led by sarpanch Surjit Singh. Aangwanwari workers were asked by Phagwara circle supervisors to encourage boys and girls who would attain the age of 18 years on January 1, 2021 to get themselves enrolled as voters. People who got married and those from the differently-abled community were also invited to vote. Supervisor Sushil Lata informed about the right to vote and how to exercise franchise. An awareness rally ‘Sadi Vote, Sadi Awaaz’ and ‘Sadi Vote Desh Da Bhavikh’, was also taken out.

Forty per cent subsidies to women in the general category and 60 per cent subsidies to women in the Scheduled Caste/Tribe category will be provided for those applying for fish farming and promote the Blue Revolution under the Pradhan Mantri Matsya Sampada Yojana (PMMSY). To raise living standards of farmers, the Fisheries Development Agency, Kapurthala, said this declaration was as per the policy to promote diversification under the PM’s aforesaid scheme. Chief Officiating Officer HS Bawa said as per the Blue Revolution scheme, Rs 7 lakh expenditure has been estimated on a 2.5 acre fish pond, on which the government will provided 40 per cent subsidy. He said five training camps will be held from November 2 to 6 during which training will be provided to famers on facilities being given by the government to ensure maximum productivity on limited land under the RAS system and Bio flock systems. He said Fish Propagation Officer Baljit Singh can be contacted for more information.