Fear struck and ‘frustrated’, they are reluctant to even attend last rites of their loved ones 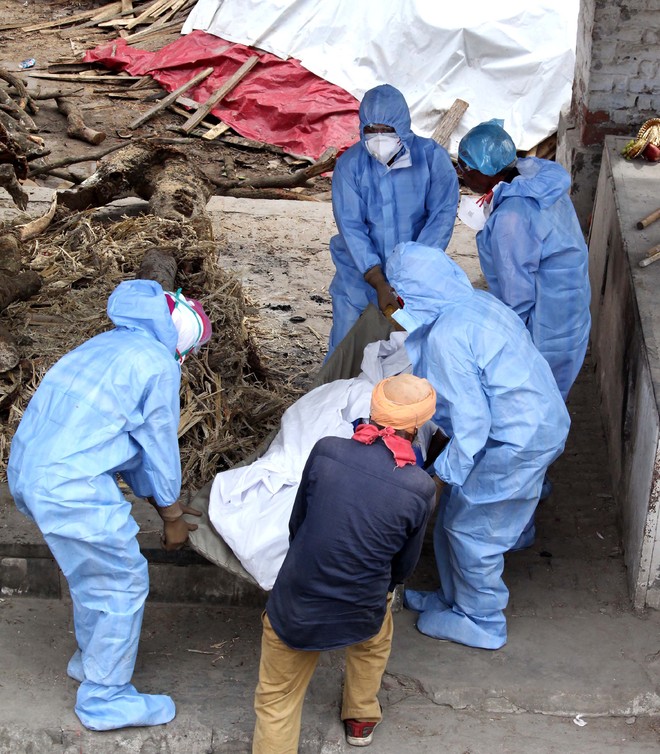 Medical staff in protective gear prepare to cremate a person, who died of Covid, at a crematorium in Jalandhar. Tribune file

While on one hand, visuals of people crying for their relatives are going viral in the country, the city has been witnessing a worrisome resurgence in the number of Covid positive patients being abandoned by their kin at hospitals.

A few days ago, a man dropped his mother with low saturation level at a local government hospital and went away only to be found some time later by doctors and the staff. On being asked why he abandoned his ailing mother in the hospital, he said he was highly ‘frustrated’ and thus wanted to run away from this misery. A doctor reminisces this incident while putting light on the gravity of the situation these days.

“This is another face of the pandemic, where one gets to know that there is hardly any humanity left in people. The virus has exposed the real side of people,” the health workers said. While many of them are going all-out to save their loved ones by seeking help on the social media, there are some people who have been running away from their responsibilities.

A Block Extension Educator (BEE), who cremates patients dying of Covid said several such incidents have been coming to the fore off-late. “We were to cremate a man who died of Covid. We kept on waiting for his daughter to come to carry out the last rites. But to our surprise, she came after making us wait for her for so long and didn’t even step out of her car,” he said.

The BEE added that these days, people who are not related even related to the patients are more forthcoming to help them in the hour of need. “Such cases and incidents have made us wonder whether the humanity is completely lost. He also said he, along with other health officials, hgave no qualms about helping the victims as they have protected themselves with PPE kits.

Senior Medical Officer from Shahkot, Dr AS Duggal said it was true that such strange incidents have come to fore where people don’t care about the patients they come with and then leave without telling anyone. “We have to face such challenges, in such circumstances, it becomes difficult for us to handle the situation,” he said.