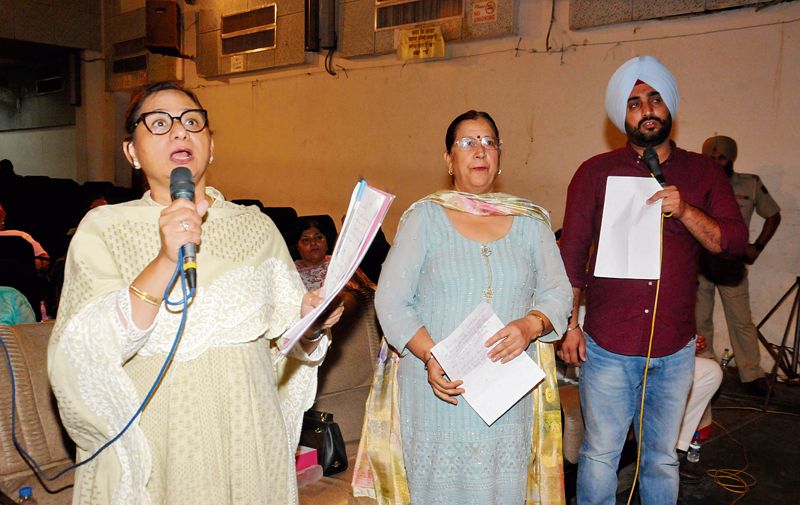 Councillors during the MC House meeting on Friday. Malkiat Singh

The much-awaited meeting on LED lights project that had already got postponed twice in the past was finally held today at Red Cross Bhawan.

It is being alleged there is a huge scam in the project. The smart city officials and the company that was given the project were to be questioned today on the same.

But the absence of both officials and the company’s contractor irked the councillors and they started pointing fingers on Mayor Jagdish Raja.

The mayor said as none of the officers was present, it clearly “indicated their involvement in the scam”. Attacking the mayor, independent councillor Davinder Rony said he had been raising several issues regarding LED for the past two years, why did the mayor remained mum on the issue then? Now, only four months were left for elections, the new MC would take up the issue naturally, he added.

The councillors alleged that the Mayor was adopting leniency towards those involved in the scam, otherwise he could have strictly taken some action against those who were not present.

Councillor Gurvinder Singh Bunty Neelkanth asked the mayor to cancel the tender and contract of the project, following which the two entered into a war of words. Another councillor Bachan Lal asked if the Mayor had questioned any of the smart city officials regarding the issue and why weren’t they coming.

Mayor Raja said, “Even newly formed AAP MLAs also didn’t come.” As the meeting progressed, councillor Shamsher Khehra questioned the Mayor if he was satisfied with the lights installed in his ward. The Mayor said “No”.

Councillor Jagdish Samrai said, “Looking at the whole scenario, it seemed that there was nothing in our hands and the meetings were mere an eyewash.” Another councillor Nirmal Singh Nimma also shared the same sentiments. He said, “We have been begging for installation of lights from these so called officials.”

Mayor Jagdish Raja has decided to form a committee comprising councillors. The mayor said the committee would inquire the issue. “We will hold the next meeting on July 6,” he said. The councillors, however, demanded a vigilance inquiry into the matter.