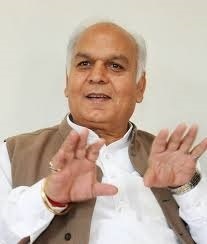 Congress leader and Chairman of the Punjab State Board of Technical Education and Industrial Training Mohinder Singh Kaypee on Sunday tested positive for Covid-19. He is among the 28 persons who tested positive in the district, taking the total number of cases to 1,206. The fresh cases include five children aged 4, 5, 10 and 14 years.

After a district-based judge, an SSP, an SDM and an RTA official, Kaypee is the fifth high-profile personality to test positive in the district. Reported with mild Covid symptoms like fever and bad throat, he has been admitted to the district IMA facility.

After various key members of the bureaucracy tested positive or met with those who were infected with the virus, the district administration on Sunday ordered the sealing of all offices from where a person had been reported positive for a period of 72 hours.

Staff attendance will be on a 50-50 basis and the ADC will immediately issue duty as per a 14-14 day roster for the staff.