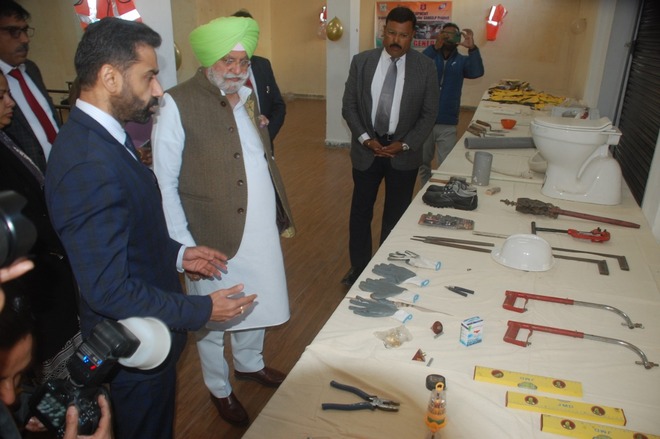 Minister Rana Gurjeet Singh and ADGP (Jails) Praveen Sinha take a round of items readied by the inmates of Kapurthala Central Jail.

Aiming to bring the jail inmates into the mainstream and channelising their energy for productive works, training courses are being started for them under the recently launched ‘Sankalp’ project of the state government.

The project was today launched at the Central Jail, Kapurthala, by Punjab Technical Education, Employment Generation and Horticulture Minister Rana Gurjeet Singh. Since Kapurthala jail has many women inmates, the minister also inaugurated the course of Assistant Beauty Therapist for women prisoners for which high-end equipment has already reached the jail premises.

Under the project, the inmates in eight jails of the state would be given vocational training. In the first phase, inmates of Amritsar, Ferozepur, Kapurthala, Faridkot, Bathinda, Nabha and Patiala and Ludhiana (women’s jail) would be imparted 400-hour training course. Under the training, the prisoners would be trained as masons, carpenters, beauty therapists, painters, electricians and plumbers. After completing the course, the inmates will be given employment in the jail as per their qualifications.

The minister called upon the inmates to start a new life by taking advantage of the skills development courses offered by the Punjab Government. He added that the the government has set up a ‘Punjab Prison Development Board’ to bring the inmates into the mainstream by further improving the jails. Apart from this, the government had signed four MoUs with various companies for the goods manufactured by the prisoners under which the entities will purchase and brand the goods manufactured by the detainees.

Rana also asked ADGP Jails Praveen Kumar Sinha to liaise with the GM of Railway Coach Factory to make the training arrangements at Central Jail, Kapurthala, and also to ensure arrangements for the consumption of prepared goods.

He also addressed the problems of the detainees and recorded his message in the visitor’s book. He also inspected the swings, sanitary ware, pot stand, parlour equipment etc. made by the prisoners.

Rajesh Tripathi, Additional Mission Director, also briefed the inmates about the courses being run in the jails. On this occasion, bhangra and giddha were performed by the prisoners while performing their art which enchanted everyone.