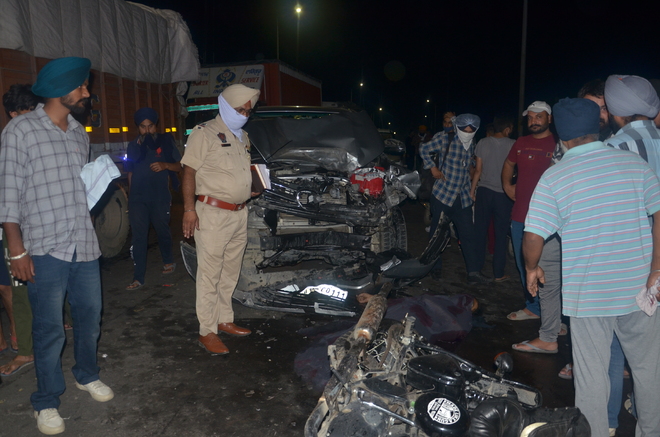 Two Toyota Fortuner SUVs (PB-10EC-0111 and PB-10CX-1656), allegedly engaged in a race on Sidhwan Canal Express Highway late last night, claimed the life a city youth, Parminder Singh (24), who was riding a Royal Enfield (Bullet) motorcycle. After colliding with each other and hitting a pole along the highway, both the SUVs went out of control.

Eyewitnesses said one SUV hit at least three two-wheelers, whose drivers sustained minor injuries, while the driver of the other Fortuner, in a bid to overtake the other SUV, rammed into the Bullet motorcycle. The crash had such an impact that the SUV dragged the motorcycle, along with its rider, to a distance of at least 20 feet. Parminder, running a mobile repair business, died on the spot, while other injured two-wheeler drivers were rushed to local hospitals.

The SHO, Dehlon police station, Sarbjit Singh said the driver of the ‘killer’ Fortuner (PB-10EC-0111), identified as Prashottam Sharma, running a cycle ancillary unit here, was arrested and charged under Section 185 (drunken driving) of the Motor Vehicles Act along with Sections 279, 304-A and 427 of the IPC.

In another road accident, Satpal Kaur (52), resident of Jassian village, was killed when a speeding Tata 407 vehicle truck hit the motorcycle she was riding pillion in front of a petrol pump, near V to V Hotel, on GT Road on Sunday.

Daljit Singh, son of the deceased woman, said he and his mother were returning home after getting shot of Covid vaccine from Oswal Hospital on his motorcycle. “When we reached near the HP petrol pump near V to V Hotel, a recklessly driven Tata 407 (PB-10CV-9166) rammed into the motorcycle. Both of us fell down on the road and the mini-truck ran over my mother, who died at the spot,” said the complainant.

He said the driver of the vehicle (Tata 407) fled from the scene. The police said a case under Section 304-A of the IPC was registered against the truck driver, who was identified as Chand Kishore, resident of Dehlon.