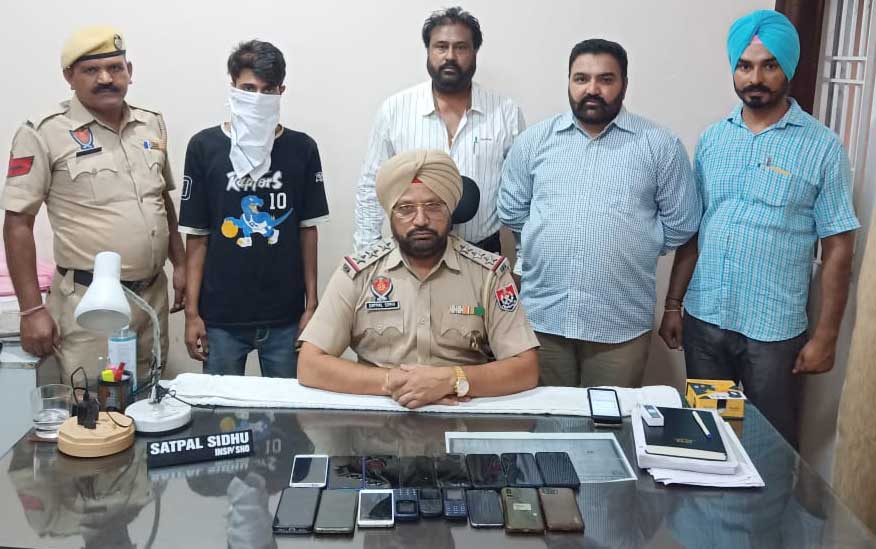 Police officials with a suspect from whom 15 mobile phones were recovered, in Ludhiana. Tribune photo

The police have arrested three snatchers and two vehicle thieves and seized two motorcycles and 16 mobile phones from them.

Mohammed Ansari, a resident of Basti Mani Singh, near Basti Jodhewal, was arrested for snatching incidents by the police on the basis of a tip-off. Information provided by the suspect during interrogation led to the seizure of 15 smartphones from him. He has been booked under Section 379-B of the IPC.

Gurpreet Singh and his brother Taranjit Singh, both residents of Gurpal Nagar, were overpowered by people on 100 Feet Road when the duo were about to flee after snatching a mobile phone at knifepoint from a woman, Madhuri, a resident of New Moti Nagar Colony.

She told the police that when she was going on foot on Monday morning, two youths, riding a Hero Splendor motorcycle, came from the rear and snatched her mobile phone. They tried to escape when she raised an alarm but were overpowered by the people who had gathered at the spot. The suspects were handed over to the police and were booked under Sections 379-B(2) and 34 of the IPC. The police have impounded the motorcycle used in the crime and also recovered the snatched mobile.

A police party deployed at Jwala Singh Chowk in Haibowal arrested two vehicle thieves near Tarsem Charitable Hospital Chowk on a tip-off on Monday and seized a stolen motorcycle (PB 10FY 0806) from the suspects, identified as Ajit Singh, a resident of Bharti Colony, Bahadarke Road, and Ashish Jha, of Joshi Nagar, Haibowal. The duo has been booked under Sections 379 and 411 of the IPC.

Harman Singh, a resident of Om Park, Near Cremation Ground, Haibowal lost his Hero Splendor motorcycle (PB 10HW 5697) to four car-borne miscreants on Sunday near Ludhiana Heights Building on Bachan Singh Road here. The victim told the police that he had gone to Ludhiana Heights with his friend Ranjit Singh for some work. “When we came out of the colony, four persons in a white Maruti Swift car accosted us. They snatched the key of the mobike and took it away,” said the complainant. The police have registered a case under Section 379-B of the IPC.

A Maruti Alto car (CH 01BR 6196) parked in the District Courts Complex was reportedly stolen. A laptop was kept in the vehicle. On a complaint lodged by the owner of the car, SI Sukhdeep Kaur, in-charge of the women cell at Fatehgarh Sahib, the police have registered a case under Section 379 of the IPC.