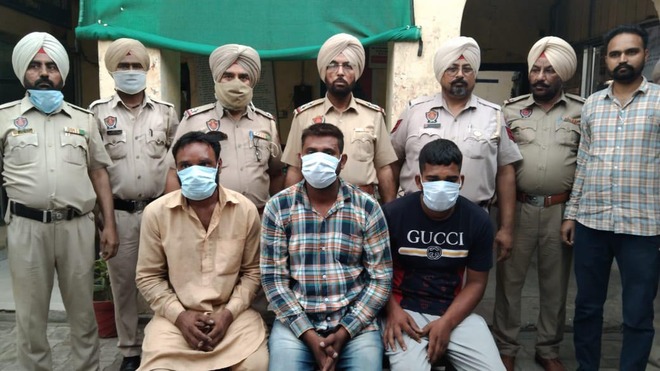 The murder accused in custody of the Doraha police. Tribune photo

The Doraha police have arrested the accused in a murder case of Buani village. The victim was found murdered in an old house two weeks ago.

The accused, Jatinder Singh of Lehal village, Gurwinder Singh Rimpy of Khatra village and Arshdeep Singh of Koohli Kalan village, were arrested by Doraha police and taken on two-day remand. A licensed revolver, a purse, cash and a gold ring have been recovered from them.

On July 5, the foul smelling body of Harjinder Singh (70) was recovered from his residence. The body bore injury marks on the head as well as forehead. A cloth too was tied around his throat, indicating death by strangulation.

Doraha SHO Vijay Kumar said the Jatinder Singh of the same village, along with Gurwinder Singh Rimpy and Arshdeep Singh, had decided to murder and loot the deceased as he was staying alone in the house. “During interrogation the three confessed to having committed the crime,” the SHO added.