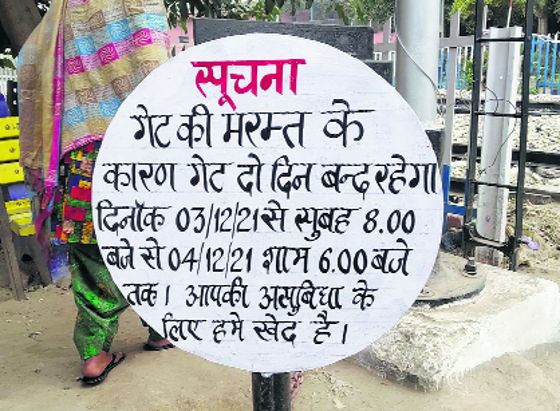 A notice in Hindi cautions commuters about the closure of the Jagera level crossing at Ahmedgarh for two days. Tribune photo

The authorities in the Railway Department have once again announced to close the Jagera level crossing on the Ludhiana-Dhuri line for Friday and Saturday. The administration has been asked to manage vehicular traffic on alternative routes for two days.

Residents of the town and surrounding villages situated on eastern end, who commute between various localities, are already a harried lot as work on the construction of the Pohir overbridge is moving at a snail’s speed.

While those travelling in four-wheelers are left with no choice except to take longer alternative routes through the Ludhiana-Malerkotla highway, two-wheeler riders do not hesitate in taking risk by commuting on unsafe railway line crossings.

Frequent closure of the Jagera road level crossing, the only route passing through the town, has been compounding problems of residents and the administration as well.