Open House: Should sops or good governance be priority of political parties for seeking votes?

Development, commitment to deliver criteria to ask for votes 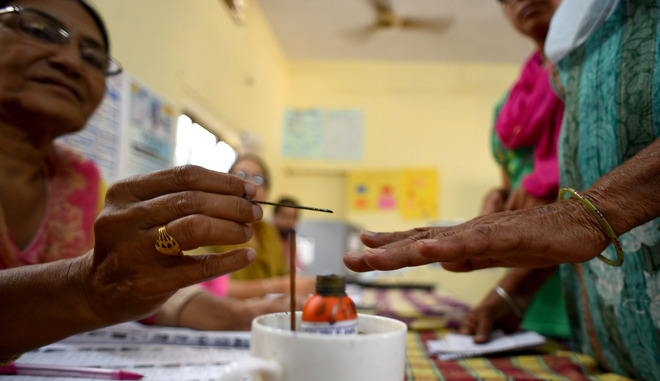 All parties are trying to woo voters as Assembly elections are due in Punjab next year. - File photo

A card to lure voters

Playing the promise card with an aim to lure voters, every political party, in its election manifesto offers freebies. Whatever be the reason, people living in poor economic conditions just walk into political trap. As instant gratification like free electricity, ration etc are offered by political parties. Today, society needs a virtuous, consensus oriented and not a demagogic leader. Therefore, while opting for a candidate, good governance should take precedence over freebies.

Keep non-performers out of polls

Political offer freebies before elections to win loyalty of voters. However, this practice shakes roots of free and fair polls. Parties should seek votes on the basis of good governance and past performance. Non-performers are supposed to be kept out of elections whether for Assembly or for parliament, which are ‘The temples of Indian democracy’.

Not good for welfare of state

Luring electorate is not a good for the welfare of the state. Good governance is the need of the hour. Candidates, who work with for the well-being of the public can easily draw attention of voters. No doubt, laws are there to prevent such activities, but these are not implemented properly. It has been seen in many cases that even alcohol and drugs are offered to the electorate. Political parties should refrain themselves from offering freebies during polls. Besides, such kinds of activities should be strictly banned.

For sure, we must prioritise good governance over freebies. It is true that many politicians try to draw voters by offering them free sops. This is a wrong practice. These sops are a temporary refuge from our problems. The permanent solution to our problems is election of an honest, sincere and gentle candidate, who is truly be worried about his constituency. He/she will be genuinely interested in the public welfare and not about his own selfish motive of just winning the elections by hook or crook. The ones, who offer sops during the election must be politely refused by the public. Instead, the public should demand good governance. The freebies, if any, must be only for the poor.

A practise uncalled for

Although all parties and leaders are well aware of the financial condition of the state, they are announcing multiple freebies to woo voters for upcoming Assembly elections. This practise is totally unwanted and uncalled for and is nothing short of hitting below the belt. Only good governance can pay rich dividends.

Resist such practise of politicians

Each political party prepares an election manifesto giving details of promises like free electricity or water or low taxes to garner votes it will fulfil once elected. Some parties even pay cash to voters staying in slums while others distribute blankets or goods needed by them. However, none is sure if all listed promises will be fulfilled after the political party concerned come to power in the state. Such practise of luring voters with financial incentives was not in vogue in previous elections. Perhaps earlier politicians were strong individuals. The Indian electorate is mature and must resist such practices of politicians. It will help in controlling this menace.

Parties’ only concern is winning elections

Ludhiana is industry capital of Punjab. The main problems of this city are mushrooming illegal colonies, which are disturbing nature and wildlife, under the garb of development supported by ruling dispensations, copying alien cultures not suitable for a country like India, which has its own rich culture, history and traditions, unending traffic snarls and pollution. Instead of solving such issues politicians and their parties are more concerned about wining in the Assembly elections by offering freebies to voters. Good governance has taken a back seat. These self-serving politicians should follow the path of Prime Ministers like Jawaharlal Nehru and Lal Bahadur Shastri and Punjab Chief Minister Partap Singh Kairon, who were true Congressmen.

Lot of expectations from leaders

There are a lot of expectations from elected leaders. People cast their votes for development of their respective areas. They must vote on the basis of merit, credibility and personality of the candidate irrespective of the party line. Leader, who fails to fulfil genuine demands of people, should be rejected. There must be provision to recall elected candidate if he/she fails to fulfil his/her promises. People need regular and uninterpreted water and electricity supply at affordable rates and not as freebies. Don’t vote for candidates who offer sops. People only want development, education, health facilities, good roads and pollution-free city and nothing else.

State exchequer will be in red

Despite knowing the fact that freebies will put state exchequer in the red zone, political parties are competing with each other to lure voters by following this practise. There are examples like state gives phones, laptops, grinders, bicycles, free electricity and water and transportation to voters. Winning elections and good governance are two different things. Providing healthcare, affordable education and housing and uninterrupted essential services like electricity and water are responsibilities of any elected government. Using freebies to lure voters is not good practise. Voters’ greediness creates problem in electing a good leader. If we don’t have a good leader, democracy will turn into mockery.

Leaders must commit to fulfil promises

Voters should demand list of previous promises made by leaders and those fulfilled. Leaders, who don’t come up to voters’ expectations, should not be allowed to stand in elections. People should demand regular supply of water, electricity, loan at nominal rates, good education and treatment in hospitals at affordable prices. They must seek commitment from leaders to fulfil promises made by them in written once elected to Assembly. If leaders fail to keep their promise, they should be forced to quit party and politics. People must cast vote for an honest leader and not for those, who lures them with sops.

It’s poor who vote for sops

Offering freebies during elections is common practise in a country in which politicians manipulate voters’ choice. Both ruling and opposition parties bribe voters through sops. Many uneducated and poor electorate vote for leaders in the hope of getting free services and goods. The electorate needs to be aware of nefarious agendas of political parties. Citizens should vote for leaders, who have kept their promises and improved their living standards. They should give priority to good governance rather than sops.

Only good governess is the key word. People from different walks of life are of the view that the party, which has worked for the people for five years, is the natural choice for casting their votes. There is no denying the fact that other factors do work in every election. Money or muscle power do affect our elections, but these have a limited effect. City residents should side with a party, which is above petty politics and secular.

Main objective is coming to power

In democracy every political party’s main objective is coming to power. This greed of power forces parties to offer freebies to voters. This is a wrong trend. Sops discourage people from work. Instead, people should demand good governance. This must include employment, good infrastructure, crime and drug free society, affordable healthcare, education and justice, besides accountability of public servants. It also holds truth that if we are enjoying freebies, we can’t demand good governance. On the other hand, shunning sops can compel any party for good governance.

Good governance should be priority over freebies for seeking votes. Freebies encourage corruption among politicians. People should vote for honest and qualified candidate, who can understand their problems and has no place for communalism. Voters should realise this truth and create awareness on true values of democracy and the power of vote.

Providing freebies to underprivileged is the best way of aspiring politicians to garner votes. Such candidates are chosen by a common man keeping in mind that they will bring positive changes in society. They lure people for their votes using inappropriate methods and bribe. These are just false promises, which are never unfulfilled for next five years. Therefore, the growth of country is still a dream and will remain a dream if such level of politics continues.

The Commissionerate Police claims to have cracked 94 per cent snatching cases with the arrest of 42 accused and total recovery of snatched articles in the past fortnight. What needs to be done to check street crime, especially in the current festival season?