To observe August 15 as ‘slavery day’ 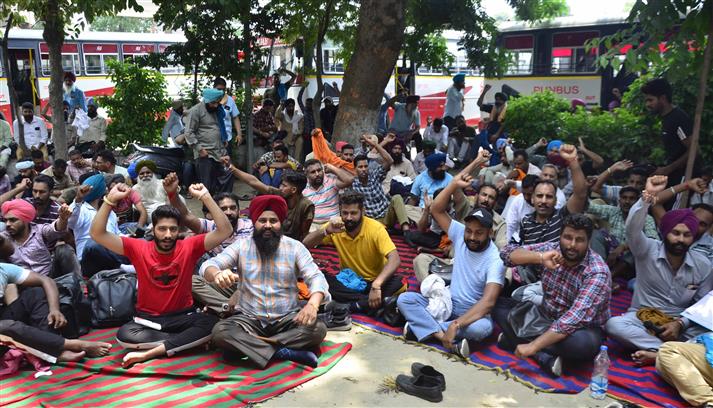 Contractual employees of PUNBUS and PRTC hold a rally on the first day of their strike in Ludhiana on Sunday. Ashwani Dhiman

Coming down heavily upon the AAP government for backing out from its promises to ad hoc and contractual employees of all departments made during the Assembly elections, the contractual employees of PUNBUS (Punjab Roadways) and PRTC (Pepsu Road Transport Corporation) started their three-day strike on Sunday. They also announced to observe August 15 as ‘slavery day.’

The trade union leaders said last time, the employees had postponed the strike at the assurance of the Transport Minister to organise a meeting of the union with the Chief Minister within seven days. However, even after two and half months, no such meeting has been convened, they said. They alleged that senior officials of the Transport Department were acting against the interests of the employees to please the transporters’ lobby.

With most PUNBUS and PRTC buses going off the roads due to strike by contractual employees, passengers had a tough time while staff of private buses left no stone unturned to make the most of the crisis. The majority of private buses were seen overloaded and stranded travellers looking desperately for alternative modes of transport at the general bus stand here on Sunday.