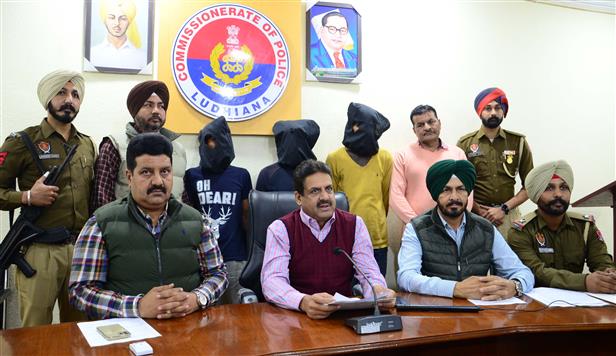 STF AIG Snehdeep Sharma addresses the media regarding the arrest of smugglers in Ludhiana.

The Special Task Force (STF) wing of Ludhiana nabbed three smugglers and recovered 3.340-kg heroin from their possession on Tuesday. The value of the recovered heroin in the international market is said to be more than Rs 16 crore.

2 of them habitual offenders

During preliminary questioning, one of the accused, Vikas, admitted that he was into the heroin smuggling trade for the past seven years. He is already facing four cases of smuggling registered against him in the past. Another accused, Gurpreet, a taxi driver, is also facing four cases of various crimes registered against him in the past.

Those arrested have been identified as Vikas Gupta, alias Bunty (33), of Preet Nagar, Gurpreet Singh (38) of Ishar Nagar and Manminder Singh (27) of Dehlon. Besides, the police also seized a car from the accused which was being used to deliver the contraband. A case under the NDPS Act was registered against the accused.

AIG Snehdeep Sharma said Inspector Harbans Singh had received a tip-off that the accused, who were into the heroin smuggling trade for a long time, were on way to deliver a huge consignment of drugs. The accused had brought heroin from some smugglers of Hoshiarpur and they had to deliver the same to their clients in Shimlapuri.

The AIG said the STF laid a naka near the Ladhowal toll plaza where after intercepting the car (PB10DM6363), when cops signalled it to stop for checking, the smugglers accelerated the car and ran towards the Ferozepur road via a flyover but after a few kilometres of chase the cops caught them near Gill Bridge.

During preliminary questioning, one of the accused, Vikas, admitted that besides running a provisional store, he was into the heroin smuggling trade for over the past seven years. He was already facing four cases of smuggling registered against him in the past. Another accused Gurpreet, a taxi driver, is also facing four cases of various crimes registered against him in the past. The third accused, Manminder, is also a taxi driver. All the smugglers are also drug addicts.

Inspector Harbans said police remand of these smugglers would be sought from court so that their interrogation could lead to more recoveries.

Notably, two days ago, the STF had arrested four smugglers with 2,795 gram of heroin. Prior to this, a city police sub-inspector along with two others was nabbed by the STF with 846 gram of heroin.