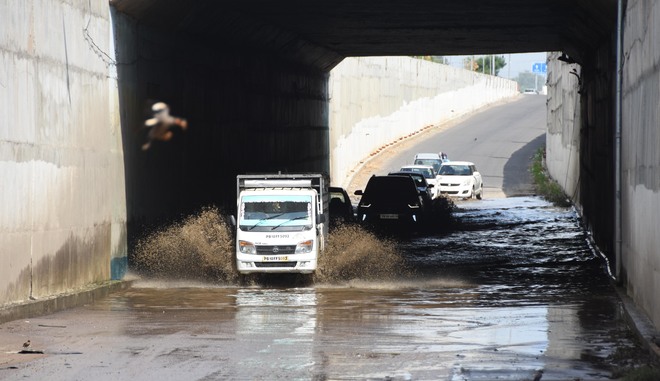 Even three days after the rain that lashed the city on Saturday night, water is still accumulated at the underpass of Southern Bypass near Ferozepur Road. It seems no efforts were made to ensure cleaning of the underpass drainage before the rainy season.

Many two-wheeler riders were forced take a detour as it was difficult for them to pass through the flooded underpass. A few four-wheelers were seen crossing the underpass at a slow speed.

Rainwater accumulates at this underpass near Verka Milk Plant during monsoon every year but no concrete measures have been taken to deal with the problem.

A congress leader, Parminder Mehta, said the pump, which was used to drain rainwater from the underpass, was non-functional. “I had earlier also complained to the PWD when rainwater accumulated at the underpasses of Southern Bypass. Three days have passed since the rain lashed the city but the authorities concerned have failed to get rainwater removed from the underpass. The district administration must look into the matter and direct the authorities to ensure the removal of water,” said Mehta.

A resident of BRS Nagar, Gaganpreet Singh, said: “It is very difficult for two-wheeler riders to pass through the flooded underpass. Vehicles also develop snag while passing through the underpass. The authorities concerned should deploy special staff to keep a check on the status of both underpasses on Southern Bypass during the rainy season.”

Meanwhile, PWD Executive Engineer Davinderpal Singh said he would look into the matter and take steps to get the problem resolved.

Spots on NH-44 waterlogged too

Several points on NH-44 are still waterlogged due to the defunct drainage. It was learnt that rainwater is still accumulated on Jalandhar Bypass near Dhandari railway station and several other points on the highway. “The NHAI must take steps to resolve the problem of waterlogging at several points, including the one near Dhandari railway station on Ludhiana-Delhi road. We appeal to the district administration to take up the matter with the authorities concerned,” said RK Yadav of Yadav Ahir Mahasabha.