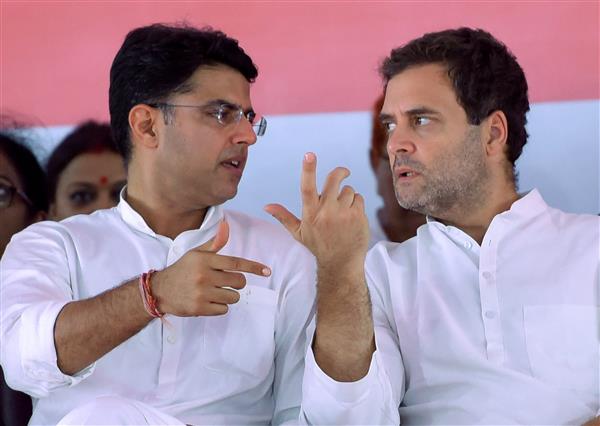 Congress president Sonia Gandhi has decided to set up a three-member committee to address issues that rebel leader Sachin Pilot has raised---a development that comes after Pilot met Rahul Gandhi in Delhi to hold parleys at a time when turbulence threatens to tear apart Rajasthan’s Congress unit.

After meeting Congress leaders, Sachin Pilot said, “We raised issues of principles before Congress leadership and welcome their assurance of time-bound redressal of our grievances."

“I don't crave for any post, party has given position and can take it back,” he added.

“Some personal remarks have been made against me. I feel there is no place for such mudslinging in politics,” the former Deputy CM added.

The Congress said in a statement issued on Monday evening that Pilot’s meeting with Rahul Gandhi was "frank, open and conclusive".

Sachin Pilot has "committed to working in the interest" of Congress party and its government in Rajasthan, the party’s statement said.

The meeting between Pilot and the Gandhis appeared to have course to what looks like some resolution to the crisis that is threatening to rip the party apart for over a month now.

Pilot and 18 rebel MLAs have been at daggers drawn with Rajasthan Chief Minister Ashok Gehlot ever since they challenged Rajasthan Speaker CP Joshi’s disqualification notices to them for failure to attend two consecutive CLP meetings in Jaipur.

The rebels challenged the notices in the High Court which stayed the process.

For any redressal, however, Pilot and rebels will be asked to vote for the Gehlot Government should the Chief Minister seek trust of the house in the upcoming Assembly session from August 14.

Even though the Congress recently sacked Pilot as Deputy Chief Minister and state unit chief they kept asking him to return to party fold and talk.

Pilot, who ran out of options after Gehlot managed to secure his flock of 102 MLAs with six former BSP MLAs also merging in the Congress, today decided to come to the talking table and negotiate his return.

It remains to be seen if the Congress leadership will restore Pilot as Deputy CM and state chief in return for his peace-making effort.

That said, the Congress is now secure in the Rajasthan Assembly after Pilot’s rebel move misfired.

Congress veteran Ahmed Patel is said to have struck the deal.

Rahul Gandhi will soon meet Congress chief Sonia Gandhi to take a final call on the Pilot issue and terms of his reconciliation with the party. — With PTI inputs