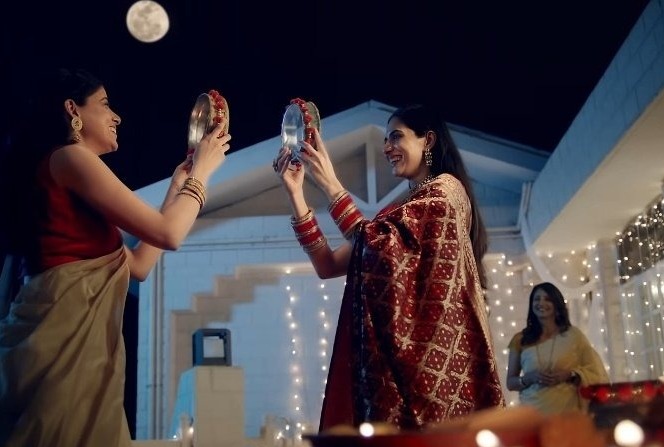 Homegrown FMCG player Dabur has withdrawn its advertisement on Karva Chauth showing a lesbian couple celebrating the festival in the ad campaign of its Fem Creme bleach and has issued an unconditional apology.

After facing backlash on social media platforms and also from a politician from the ruling BJP, the company has withdrawn the ad campaign.

"Fem's Karwachauth campaign has been withdrawn from all social media handles and we unconditionally apologise for unintentionally hurting people's sentiments," said Dabur India on its Twitter account.

The development comes just a week after ethnic and traditional apparel maker FabIndia removing a promotional capsule about its new festive line after backlash from right-wing groups on social media platforms.

The Fem Creme ad, which had gone viral, has depicted two young women preparing for their first Karva Chauth festival while one is applying bleach on the other's face.

In the ad, both women are seen discussing the significance of Karva Chauth and the reason for celebrating it. Another woman joins them and gifts both of them a saree to wear for the occasion.

In the night, both women are seen facing each other like husband-wife with a decorated plate having a glass of water, signalling them as partners following which Fem's logo appears on the screen and the voiceover says, "glow with pride".

WHY these kind of woke experiments are being deliberately done only with Hindu Festivals & traditions?? #Dabur #DaburAd #KarwaChauth pic.twitter.com/PYA0Y2WWez

Though a section of people also hailed Dabur for its pro-LBGQTIA+ stance.

On Monday, Madhya Pradesh Home Minister Narottam Mishra had said he has directed the state police chief to convey to Dabur India to withdraw the "objectionable" beauty product advertisement and take legal steps if the ad is not taken back by the consumer goods maker.

Earlier on Sunday night, Dabur had responded to the social media backlash in a separate statement, saying, “Dabur and Fem as a brand strive for diversity, inclusion and equality, and we proudly support these values in our organisation and within our communities.

“Our campaigns too reflect the same. We understand that not everyone will agree with our stance, and we respect their right to hold a different point of view. Our intention is not to offend any beliefs, customs and traditions, religious or otherwise. If we have hurt the sentiments of any individual or group, it was unintentional, and we apologise,” it had said. Attacks on corporate houses on such progressive commercials are on the rise in recent times.

Earlier, Tata Group's jewellery brand Tanishq was forced to withdraw an advertisement that showed an interfaith couple at a baby shower organised for the Hindu bride by her Muslim in-laws.

It withdrew the advertisement after trolling soon spread to physical threats to company employees and stores.

Clothing brand Manyavar too was at the receiving end when its advertisement featuring Bollywood actor Alia Bhatt in wedding attire, appeared to question an old tradition. — PTI