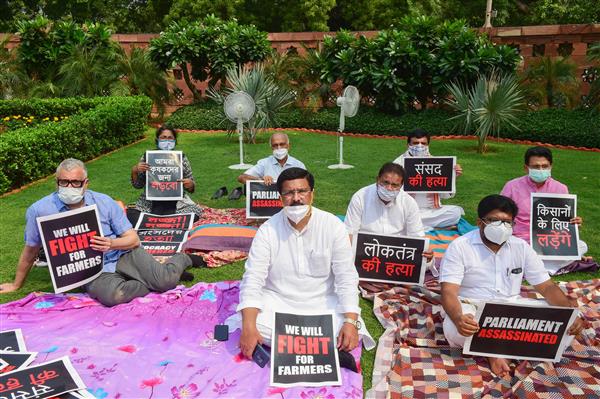 The sit-in protest by eight suspended MPs on Parliament premises continued for the second day on Tuesday, with Rajya Sabha Deputy Chairman Harivansh Singh offering them tea in the morning.

The suspended parliamentarians spent the night in the lawns near Mahatma Gandhi's statue. AAP's Sanjay Singh posted a picture on Twitter from the protest site in the morning saying the "whole night was spent under the open sky in front of Bapu's statue".

The RS deputy chairman, the leaders said, arrived early in the morning with a posse of news cameras and was told by a senior MP to visit them without the cameras and sit with them.

"Another senior MP also told him that while bringing tea was a nice gesture, he was still in the wrong in what he did. He was told that he was the one who broke the rules," a protesting MP told PTI.

The protesting MPs did not accept the tea and snacks offered by the deputy chairman.

Harivansh Singh has been in the thick of things since the suspension drama unfolded. The eight MPs were suspended for the remaining part of the current session over their "misbehaviour" with the deputy chairman during the passage of the farm Bills on Sunday.

Naidu also rejected a notice for a no-confidence motion against the deputy chairman as it was not in proper format and a 14-day notice period was not given.

Opposition parties hit out at the government over the suspension of the Rajya Sabha MPs, with the Congress terming it "undemocratic" and "one-sided".

The suspended MPs have vowed to continue their protest and are even likely to demand that they be allowed to attend the session.

Four of the eight suspended Upper House members had moved resolutions opposing some key Bills that appear in the Rajya Sabha List of Business announced for Tuesday. The four MPs are Derek O'Brien, Rajeev Satav, Elamaram Kareem and KK Ragesh.

Since they are suspended, their names don't figure in the list.

The Monsoon Session is scheduled to end on October 1. However, the session is likely to be curtailed with several MPs testing positive for COVID-19. PTI

To personally serve tea to those who "attacked and insulted" him a few days ago as well as those sitting on dharna, Modi tweeted, shows that Harivansh had been blessed with a humble mind and a big heart. It showed his greatness, the prime minister said, adding that he joined the people of India in congratulating Harivansh.

"For centuries, the great land of Bihar has been teaching us the values of democracy. In line with that wonderful ethos, MP from Bihar and Rajya Sabha Deputy Chairperson Shri Harivansh Ji's inspiring and statesmanlike conduct this morning will make every democracy lover proud," he said. PTI