Ashish was arrested around 11 pm on Saturday after being grilled by SIT at the crime branch office in Police Lines, Lakhimpur Kheri 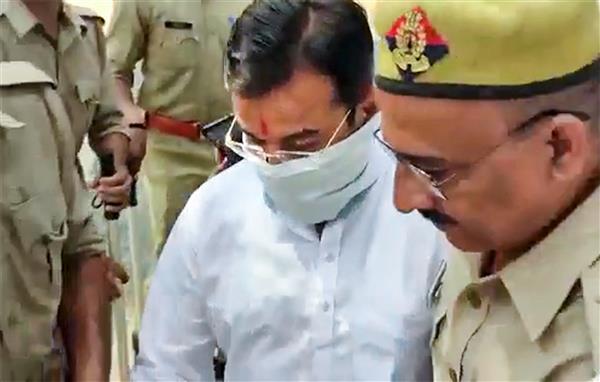 Union minister Ajay Mishra’s son, who was arrested in connection with the Lakhimpur Kheri violence, has been remanded in judicial custody for 14 days and placed under Covid quarantine in the district jail here, officials said on Sunday.

Ashish Mishra was produced before a court late on Saturday night after around 12 hours of questioning over the violence, in which eight people, including four farmers, were killed.

Ashish was named in an FIR following allegations that he was in one of the vehicles that mowed down the farmers protesting over UP Deputy Chief Minister Keshav Prasad Maurya’s visit last Sunday.

A medical team examined Ashish Mishra in the crime branch office here after which he was taken for production before a judicial magistrate, who sent him to 14-day judicial custody, senior prosecution officer SP Yadav told PTI.

He said an application for police remand of Ashish Mishra was submitted to the judicial magistrate who fixed it for hearing at 11 am on Monday.

A senior official said the Union minister’s son was taken to the district jail, where he has been placed in quarantine under the Covid-19 protocol.

“Initially, inmates are kept in isolation, away from the main barrack. Jail food is being given to him. The quarantine period is of 14 days and his (medical) tests will be done,” the official said.

There is also a “threat perception” angle, he told PTI but refused to give details.

Ashish Mishra has been kept in Barrack No. 21, sources said.

Union MoS (Home) Ajay Mishra reached his office on Sunday morning but maintained a distance from the media and refused to say anything on this issue.

He remained in his office till around 1 pm.

Meanwhile, Congress leader Priyanka Gandhi Vadra at a rally in Varanasi on Sunday accused the government of the bid to save the minister’s son and said except BJP leaders and their “billionaire friends” nobody is safe in the country.

“We will continue to fight till the Union MoS (Ajay Mishra) resigns,” she said. BJP’s Pilibhit MP Varun Gandhi too warned against attempts to turn the Lakhimapur Kheri incident into a “Hindu vs Sikh battle”.

“To use the word ‘Khalistani’ liberally to describe the protesting farmers is not only an insult to the generations of these proud sons of the Tarai who have fought and shed blood on our borders, it is also extremely dangerous for our national unity if this provokes the wrong kind of reaction,” he said.

Ashish Mishra, who is known as ‘Monu Bhaiya’ in the area, spent the night in the district jail. He had appeared before the SIT around 10.30 am on Saturday after a second summons was served to him the previous day when he did not turn up for interrogation.

He was arrested around 11 pm on Saturday after being grilled by the SIT at the crime branch office in the Police Lines.

Aged around 35, Ashish Mishra looks after the political activities of his father in his Kheri parliamentary constituency.

The Supreme Court had on Friday questioned the non-arrest of the accused, directed preservation of evidence and mulled transferring the probe to another agency.

Without mincing words, a bench headed by Chief Justice N V Ramana had said the law must take its course against all accused and the government has to take all remedial steps in this regard to inspire confidence in the investigation of brutal murder of eight persons.

The Samyukta Kisan Morcha (SKM), which is spearheading the agitation against the Centre’s three farm laws, had alleged that the violence was held under a pre-planned conspiracy and demanded the arrest of the minister and his son.

The farmer unions said if the government does not accept their demands by October 11, they will take out a ‘Shaheed Kisan Yatra’ from Lakhimpur Kheri with the ashes of slain farmers.

A nine-member team headed by Deputy Inspector General of Police (Headquarters) Upendra Agarwal has been formed to investigate the FIR lodged against the minister’s son and others in the Lakhimpur Kheri violence. PTI