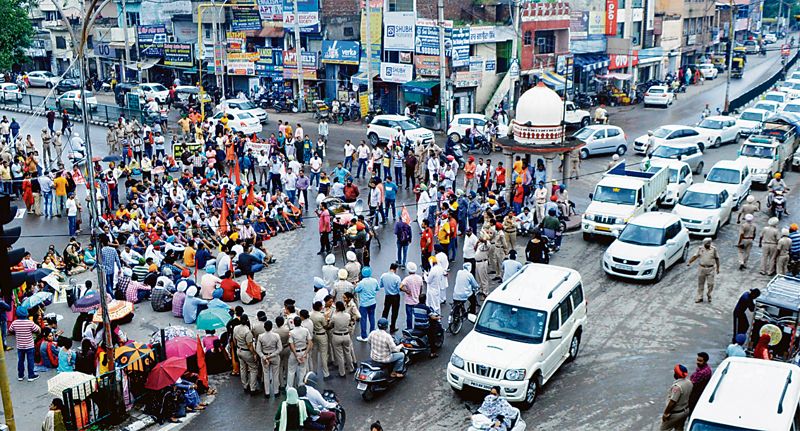 Local commuters and the ones passing through the city are facing a harrowing time with traffic snarls being reported on almost all roads. Agitators have blocked some roads permanently.

Last night, traffic jams stretching up to 5 km were witnessed on the Sirhind road where traffic coming from Chandigarh and Sirhind side was diverted.

Agitators have erected tents at two protest sites while the district administration has turned a blind eye to the encroachment. Contractual employees of the Pepsu Road Transport Corporation (PRTC), contractual employees of various departments, police recruits awaiting joining and teachers are on strike in Patiala.

“It took me three hours to reach from Chandigarh to my house in Patiala. To cover the last 6 km in Patiala, it took me around two hours. There was no policeman to manage the traffic. Even buses and trucks were using that narrow Sirhind road,” said a former IAS officer.

“People in the hometown of the Chief Minister are suffering every day due to regular blockades by various associations. It is high time the government starts bothering about the common man on road,” he said.

Another commuter, Ashim Gupta, told The Tribune that earlier, it would take 15 minutes to reach the bank from his house. But these days, it took him an hour to reach there. “Fuel prices are rising and it is sheer harassment being faced by the public in Patiala. The government is not acting tough and agitators block roads at will,” he said.

“The agitators come to Patiala since they want to be heard in the CM’s home constituency. But since the CM is not here, only residents of Patiala are being troubled,” he added.

The police are under pressure regulating traffic and ensuring law and order at dharna sites in the city. Owing to inability on the part of the government to take decisive action against agitators, all major roads stand blocked.

“A majority of agitators are demanding regular jobs or are upset with the government on some pretext or the other. If we get clear directions, we can stop all such agitations,” said a police officer, preferring anonymity.

Patiala SDM Charanjit Singh said: “We have asked the traffic police to put up more traffic signage boards on the Sirhind bypass. Moreover, we are planning to deploy more traffic marshals on the stretch to manage traffic movement. Besides, people, who want to go to Chandigarh , should use the Sangrur bypass.”

The administration has stated that the Patiala-Rajpura road from Urban Estate Chowk to Choura Road Chowk would be closed to traffic from Sunday for construction of a flyover in front of the new bus stand. People coming from Chandigarh/Rajpura side are advised to divert from Urban Estate Chowk to the Sirhind bypass. Those coming from Patiala and going to Rajpura/Chandigarh side can take route via Sirhind bypass/Baddi Nadi road.

According to the data collected by The Tribune, 1,153 dharnas or agitations had been held in Patiala from March 1 to August 31. Of these, 57 were state-level dharnas, for which the district administration had to call additional force from other districts and even reserve battalions. Several police personnel and agitators were injured during protests. On an average, the district police and local residents are troubled by around 200 agitations per month.