Students to block traffic on Mar 4 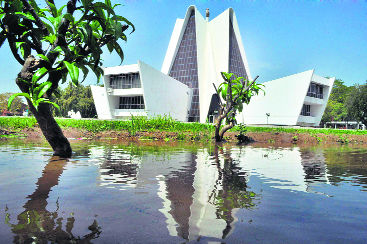 Paucity of funds at Punjabi University, Patiala, has pushed its employees and students to resort to frequent protests. The university now looks up to the state government for special grants to pull it out of financial slump.

The university has failed to deposit the salaries of its employees on time for the last several months. As such, the university’s teachers’ association, PUTA, and non-teaching employees have been staging protests for over 150 days now. The shortage of funds has also led Class-IV employees to protest.

Officials said the university’s expenditure increased over the years, but its cumulative income remained static. As of 2020-21, it faced a budget shortage of Rs 291 crore. Dr Nishan Singh Deol, president, PUTA, said, “The state grant to the university in 1991-92 was Rs 15.15 crore — 85 per cent of its budget. It was merely 15 per cent of the university’s total budget of Rs 676 crore of 2020-21. The university is in desperate need of funds to pull it out of the financial slump and the state government should provide it a special grant.”

Research has also suffered a blow. Prof Lakhwinder Singh, former additional Dean, Research, said, “The university was initially established for the purpose of research and postgraduate teaching, but it now fails to allocate any grants for research. Works, including Sikhism encyclopedia, have been carried out here. Now research projects carried out at the university are either self-financed or funded by other universities.”