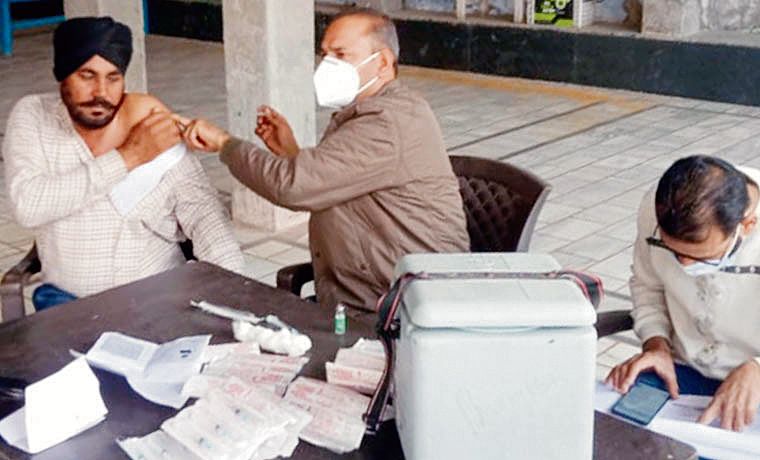 A health worker administers a dose of the Covid-19 vaccine to a beneficiary in Patiala on Wednesday. Tribune photo: Rajesh Sachar

Amid a tepid response to the Covid-19 vaccination drive, around 10 villages in the district have successfully achieved 100 per cent first dose vaccination among its adult population. The district administration and Health Department has decided to felicitate ASHA workers, ANM and community health officers of the said 10 villages for achieving the target.

Officials of the Health Department said that all residents in six villages of Bhadson block and two each of Harpalpur and Kallon Majra blocks have received their first jab of Covid vaccine.

Dr Veenu Goyal, district immunisation officer, said that more villages in the coming days would achieve similar targets. She said, “The number of such villages will increase till the ‘Har Ghar Dastak’ vaccination campaign will end on November 30. Our officers are trying hard to convince people to get the vaccination.”

Officials of the Health Department said the response from the beneficiaries to the vaccination campaign had not been positive. The department said that they reached out to 636 beneficiaries in 27 villages on Wednesday who had not received even a single dose of Covid vaccines under the campaign. However, only 215 (33 per cent) agreed for vaccination and received the dose.

The Health Department claimed that beneficiaries were reluctant to receive the vaccine, therefore, the vaccination figures had not improved much despite knocking at the doors of their residences.