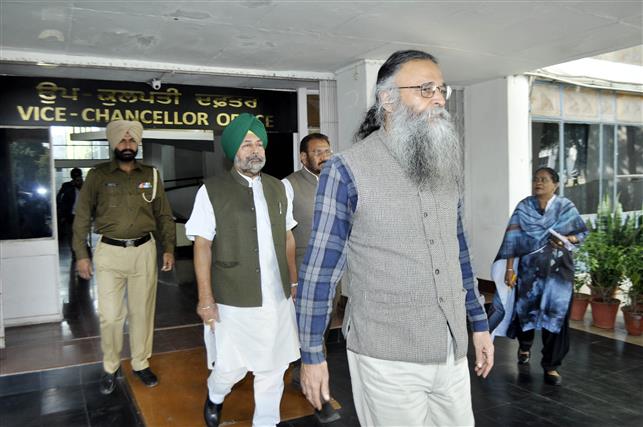 Punjabi University VC Prof Arvind comes out after a Syndicate meeting on Thursday.

Punjabi University has again marked an inquiry into five matters of scams pending for years and has ordered officers to identify the people ‘exactly responsible’ for them and suggest action.

The Vice-Chancellor, Prof Arvind, today organised a press conference on the campus, but failed to divulge the details of the action being initiated in all scam matters, including the fake SC/BC certificate scam, and said the exact details would be presented in the minutes of the meeting only.

The university also held a meeting of the syndicate. Professor Arvind said: “We have presented all probe matters to the Syndics in a tabled form. They expressed satisfaction at the progress.”

He said the university had also decided on the action to be initiated in relation to the SC/ BC certificate scam.

The VC said the syndicate discussed 105 pending matters of the Career Advancement Scheme and “Contrary to assumptions, they did not include the employees who are part of investigations into various scams.”

The university is otherwise looking forward to two important developments — the convocation to be held on December 9 and visit of the Chief of Army Staff at the 50th anniversary of the 1971 India-Pakistan War on December 6.

The university, after the recent changes in the state government, also discussed its financial status. The VC said: “We have conveyed to the government that the university’s grant should be increased to Rs 20 crore monthly to smoothen its process and its bank loan should also be waived.”

The university is also making efforts to generate funds from various government and private agencies, including the ‘Fund for Improvement of S&T Infrastructure in Universities and Higher Educational Institutions’ (FIST) program of the Department of Science and Technology (DST).

The student bodies active in Punjabi University on Thursday held a convention on the dismal financial condition of the university, in which officials from the campus, including teaching and non-teaching employees, were also invited. They accused the state government for the financial slump of the university and said it was working on the agenda of privatisation of the institution. They said they decided that the state government should waive the university’s loans and increase its monthly grant. The activists said: “The increase in fees should be rolled back while action should be initiated in relation to pending matters of inquiry.”

Alleging that the university administration has failed in initiating action in matters of inquiry, student activists of the Secular Youth Federation of India (SYFI) ‘gheraoed’ the guest house where the press meet was organised. The activists had organised a protest on the campus during the day as well.