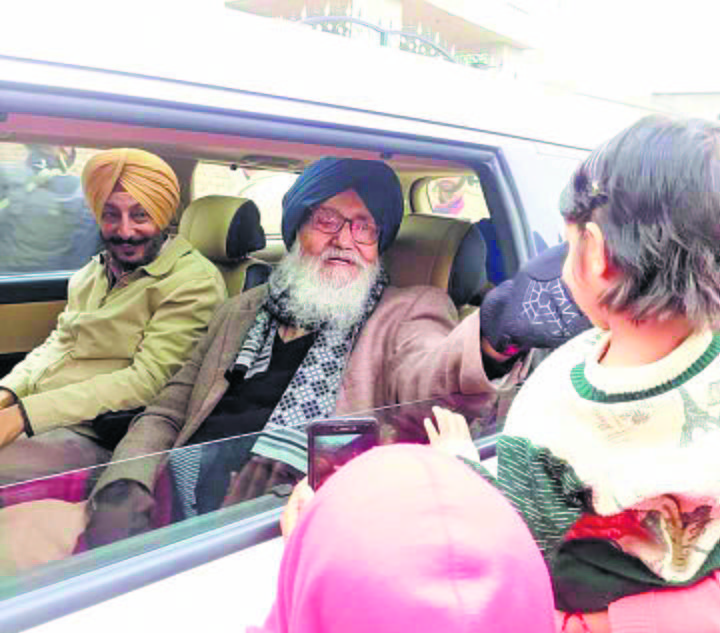 The extreme cold weather conditions notwithstanding, the grand old man of Punjab politics, Parkash Singh Badal, has started door-to-door campaigning at his home turf Lambi. At 94, he is the oldest active politician of the state.

Will be oldest in fray if he contests

The former CM had been regularly holding public meetings before the imposition of poll code and subsequent ban on political gatherings.

Though Badal has already covered most part of the Lambi constituency, he decided to go door to door to mobilise support for the SAD in the remaining around 15 villages.

Badal today spent nearly four hours at Mann village. He remained seated in his car most of the time and met villagers from a distance.

He asked everyone about their well being and appealed to them to support the SAD. Badal has been winning consecutively from Lambi since 1997. The Shiromani Akali Dal is yet to declare his nomination for the upcoming elections.

One of his aides said, “Despite his age, Badal sahib is full of enthusiasm. He will complete a tour of the entire constituency. His visit remains low key with no use of loudspeakers. Area residents have brief interaction with him.”

Badal has also been participating in party’s election meetings. He along with his son Sukhbir Badal, who is also the chief of the Shiromani Akali Dal, recently held a meeting with their relatives and supporters and assigned them election duties.

“The electioneering has changed completely. We are solely relying on door-to-door canvassing. The culture of star campaigners has ended. The onus is on village leaders now,” said SAD vice president Tejinder Singh Middukhera.