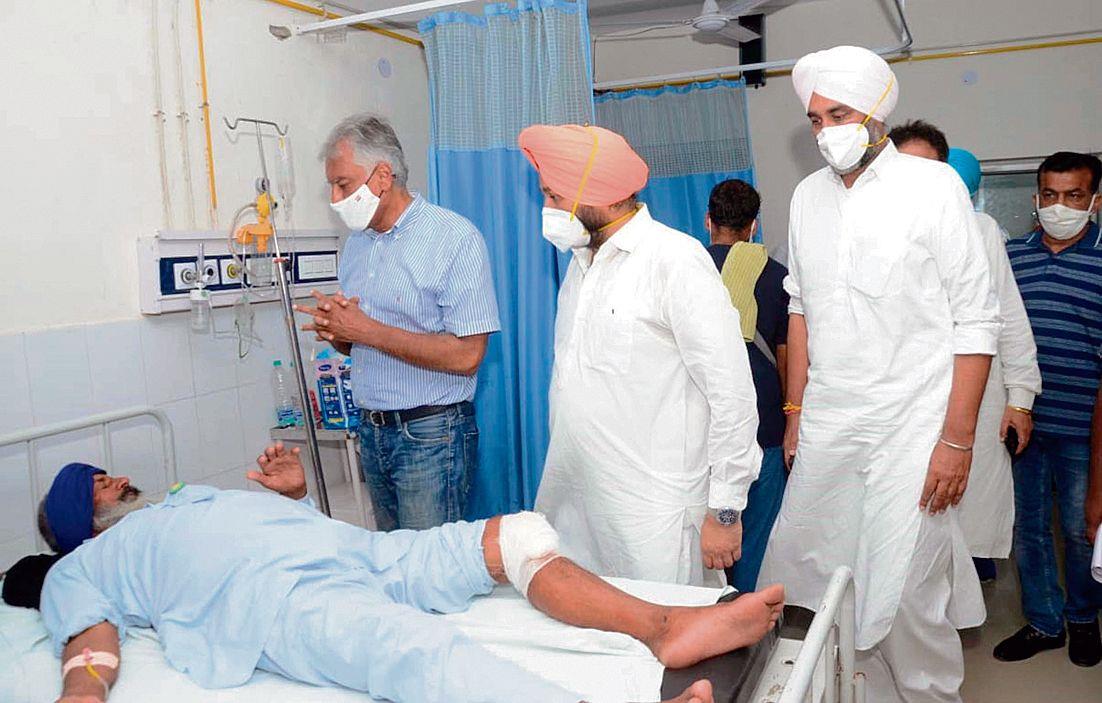 Congress leaders meet an injured farmer at the Civil Hospital in Bathinda on Wednesday. Tribune photo

A farmer died while 17 members of the BKU (Ekta Ugrahan) were injured as a bus carrying farmers returning from a protest at Badal village met with an accident near Kotbhara village on the Mansa road late Tuesday night.

Farmers staged a protest at ITI Chowk on the Mansa road flyover today to demand Rs 10 lakh compensation to the deceased and free treatment to the injured. The deceased has been identified as Mukhtiar Singh (62) from Kishangarh village in Mansa district.

The bus was carrying members of the BKU (Ekta Ugrahan), who were staging a protest at Badal village for the past many days. The protest was lifted around 8 pm yesterday night. On the way back, their bus broke down and they took another bus to head to their homes, which rammed into a stationary tractor-trailer. The injured were taken to the Civil Hospital and Max Hospital, where Mukhtiar died during treatment.

BKU (Ekta Urgahan) leader Jagseer Singh said they were protesting as no medical treatment was given to the injured on time.

Later, PPCC president Sunil Jakhar, along with Finance Minister Manpreet Singh Badal and Revenue Minister Gurpreet Singh Kangar, reached the Civil Hospital and met the injured farmers. They promised that the government would bear their medical expenses and provide compensation to the deceased.

Talking to mediapersons, Jakhar accused the SAD of “backstabbing” the farmers by speaking in favour of the farm Bills for four months.

Meanwhile, the Revenue Patwar Union, Punjab, has extended its support to the farmers for their September 25 agitation. The association of patwaris has also written a letter to the President of India, requesting him not to accord assent to the three farm Bills, saying these were against the interests of farmers.

Bathinda: Shiromani Akali Dal’s Kisan Wing president and former minister Sikander Singh Maluka on Wednesday appealed to Prime Minister Narendra Modi to take back the farm Bills as farmers were against them. Addressing mediapersons, he said, “We were not late, we were holding regular meetings with farm leaders and the Centre to resolve the issue. From Day 1, we were clear that we will stand with the farmers.” tns