In Fazilka, sit-in outside SSP’s office 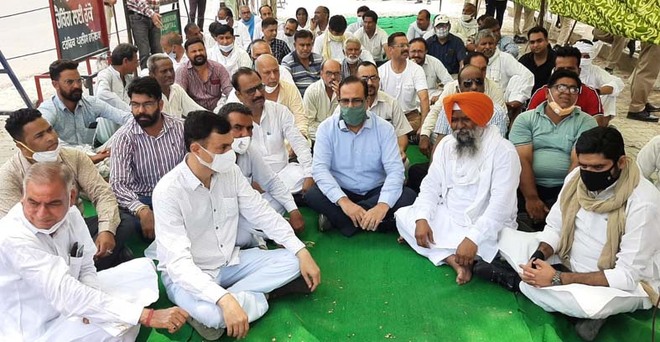 BJP activists were joined by Abohar MLA Arun Narang during their protest in Fazilka. Tribune photo

A large number of BJP activists today held a dharna outside the Fazilka SSP’s office against the alleged assault on party spokesperson Bhupesh Aggarwal in Rajpura yesterday.

The sit-in was attended by Abohar BJP MLA Arun Narang, who was also attacked in Malout on March 27. Some persons allegedly tried to remove the barricades put up by the police in an attempt to reach the protest site.

“Farmers had come to stage a protest and tried to remove the barricades, but they were not allowed to move ahead,” said Ajay Raj Singh, SP (Investigation), Fazilka. Narang alleged there was a total collapse of law and order in the state and goons of the ruling party were trying to throttle democracy and gag the Opposition, which would be opposed tooth and nail. — OC