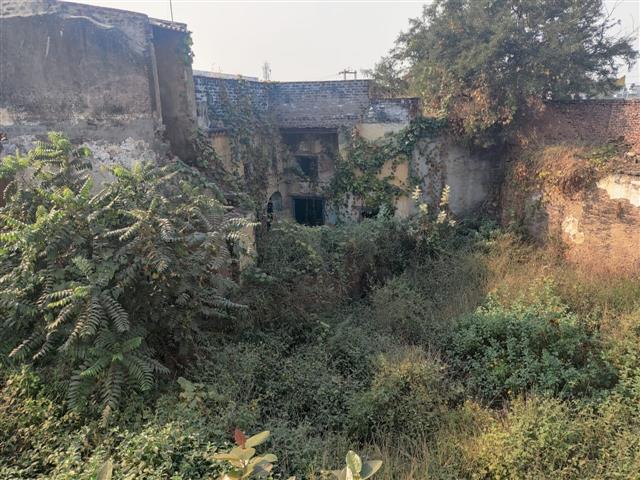 The personal house of Lala Lajpat Rai, an acclaimed author, freedom fighter and a politician lies in a dilapidated condition here.

While the parental house of one of the key players of the Indian freedom struggle has already been adopted by the Archaeological Survey of India (ASI) and has been declared a national monument, his own house (separate building) presents a picture of sheer neglect on the eve of his martyrdom day, which falls on November 17.

The personal house of Lala Lajpat Rai, popularly known as Punjab Kesari and one of the three members of the Lal Bal Pal trimurti, was discovered by Kunal Mehta, a history teacher at Lala Lajpat Rai DAV College, here.

This college was founded by Lala Lajpat Rai in the memory of his late father Radhe Krishan under the banner of the RK Trust. Sharing the discovery, Mehta told The Tribune here on Wednesday that Lalaji got a personal house constructed in the city in 1907 where the nameplate with “L. Lajpat Rai Jagraon 1907”, inscribed in the black on a white slab, was still visible.

“However, this deserted house is in shambles. Someone made an unsuccessful attempt to illegally take the possession of the house a few years ago, but the timely intervention of the district administration foiled the attempt of the miscreant,” he recalled.

Mehta said since Lala Lajpat Rai was a great visionary, who knew the value of education, had also set up a school in the memory of his mother Gulab Devi within the premises of this house.

Besides, he bequeathed a big chunk of his property situated in the city to the school. “The aim was to fund the education of the students of his city/area,” he revealed on the basis of his research.

He shared that Lala Lajpat Rai spent a considerable period of his life in his parental home at Jagraon. “Now, this house is a national monument. My interest in Lalaji soared when my principal assigned me to do research on this great son of Punjab,” the researcher said.

During the research, he also met Lala Lajpat Rai’s grandson Anil Aggarwal, who was a chartered accountant by profession and was residing in Jagraon. “My interactions with him unravelled a few unknown facets of Lalaji’s personality. Besides, I also came across a bunch of crucial documents related to the life of the great martyr,” he recollected.

ASI should adopt this house too

I believe that the ASI should also adopt this house and the school and convert them into a national museum, like the parental house of Lala Lajpat Rai. This would be a real tribute to the martyr. Kunal Mehta, history teacher at Lala Lajpat Rai DAV College