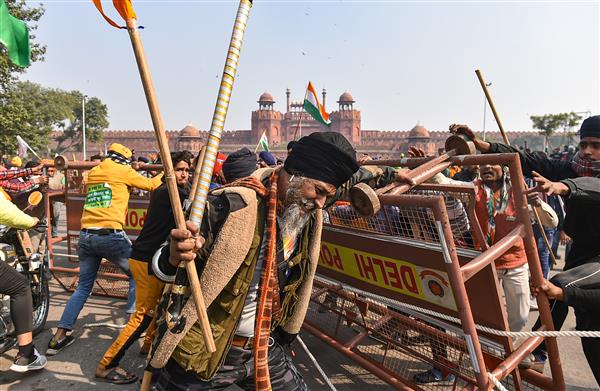 Farmers remove police barricades set up near the Red Fort during the Kisan Gantantra Parade amid the 72nd Republic Day celebrations in New Delhi on Tuesday. PTI photo

The Ministry of Home Affairs has ordered additional forces to be deployed inside Delhi after clashes erupted in several parts of the national capital during a tractor rally on Tuesday, official sources said.

The directions come after a high-level meeting at the Ministry of Home Affairs.

Ten of the 15 companies would be from the Central Reserved Police Force, official sources said.

Meanwhile, Delhi Police Commissioner has ordered his force to deal with “trouble making” protesters who still remained in the national capital with a strong hand, sources said.

They said some people still remained at the ITO, one of the scenes of chaos.

Additional forces have also been stationed at the Red Fort, another scene of chaos.

As an immediate measure the Home Ministry suspended internet connection around the most volatile Singhu, Tikri and Nangloi areas until midnight on Tuesday.

Meanwhile, thousands of farmers broke barricades at Nangloi and entered the city to march towards the Red Fort, where thousands of protesters had reached earlier on Tuesday after breaking barricades, flashing weapons, damaging public property, and threatening to run over cops with speeding tractors.

A farmer from Uttarakhand, Navneet, died when the speeding tractor he was driving turned turtle, said the Delhi police, even as several farmers sat on a dharna at ITO beside the body of the deceased.

Unprecedented scenes of chaos and vandalism erupted across central Delhi on Tuesday as the two month farmer agitation turned violent and went out of control of Samyukta Kisan Morcha, the umbrella body that had promised a peaceful tractor parade on the Republic Day.

The morcha and the Delhi Police had arrived at a 37-point understanding before the tractor parade permission was granted. None of the agreed upon points were honoured, as was clear from the start of the day with the farmers breaking into Delhi from all borders even before the Republic Day parade on Rajpath had concluded.

At Ghazipur Border, thousands of farmers broke into Delhi’s arterial roads and reached ITO intersection right next to the Delhi police headquarters.

The ITO looked like a war zone for hours with farmers on tractors ramming across and many clashing with the police, which lobbed tear gas shells to contain the crowds.

Several protesters defied police appeals not to move towards the Red Fort and stormed the historic structure before hoisting saffron flags aloft the Red Fort in visuals that enraged netizens and commoners alike.

“If we violate peace, we will not win. We appeal to farmers to return to the path of peace. Do not undermine the peaceful farmers’ protests,” said Yadav as the union leaders washed hands off the protesters.

Another farm union leader Rakesh Tikait alleged he had identified the miscreants and these agitators were part of a political party.

While government ministers condemned the violence and the unfurling of a specific flag at the Red Fort with culture minister Prahlad Patel leading the charge, Congress leader Rahul Gandhi said violence was no solution and asked the government to repeal the farm laws against which the farmers have been agitating for over two months now. A host of Congress leaders including Kumari Selja and Sachin Pilot demanded the laws be rescinded.

HOW THE TRACTOR PARADE WENT AWRY

10:00 am: Farmers break barricades at Singhu, Tikri and Ghazipur Borders to enter Delhi’s arterial roads; this even though the R Day Parade was on. The agreement with the police was that the police will remove the barricades once the R Day parade ends

10:30 pm: Farmers at Ghazipur Border break the first barricade at Ghazipur check point and move in towards Delhi violating the route agreement under which they were to take a U turn towards Anand Vihar and return to the highway.

11:00 am: Farmers at Ghazipur break the second barrier at Noida Link Road and move past Akshardham towards central Delhi ITO, saying “we will conquer the Red Fort.

11:15 am: Ghazipur Border was the most volatile with section of farmers using tractors to break concrete barricades; some Nihangs flashed swords at cops but were prevented by other protesters

1:15 pm: Several tractors and farmers break police cordons to move towards Red Fort; a farmer dies at ITO after a speeding truck he was driving turns turtle

2:00 pm: Thousands of farmers storm the Red Fort, some climb the flagstaff to unfurl a saffron flag, park all around the Fort

2:10: Rahul Gandhi tweets against the violence but seeks repeal of farm laws

2:37 pm: BKU’s Rakesh Tikait asks farmers to return to pre decided routes but to no avail

4:00 pm: High level government meeting starts to decide on ways to tackle the siege of the capital. Home Minister chairing, orders additional forces in the city.