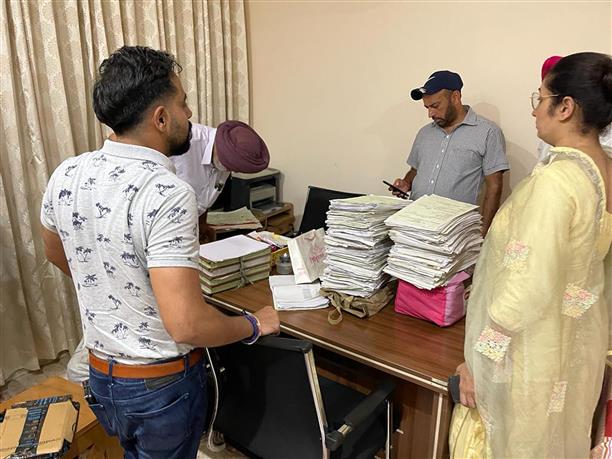 VB SSP Diljinder S Dhillon said the entire operation was uncovered last evening. The MVI, who has served for several years here, is due to retire in two years. He held additional charge of two more districts. He was reportedly away to Gurdaspur when the VB sleuths initiated action against him.

The sleuths first caught hold of Radhe, whom he had hired as his private agent and was paying Rs 15,000 per month. Radhe had been handling Kaler’s office quite independently and even used to make entries in the official register in his handwriting, which is likely to be taken as an evidence. He had also set up a network of eight-nine conduits outside the MVI’s office and all deals were made there.

Kaler was hardly inspecting any vehicle and the owners were being issued fitness certificates only in lieu of the bribe amount reaching him. The VB team found that the conduits outside the MVI office were seeking bribe on his behalf. Files readied by the conduits and moved in the office even had specific coding, indicating as to who had prepared it so that the bribe collection could be made later accordingly.

After a similar swoop of the VB in the MVI office in Sangrur, Kaler had reportedly stashed his bribe amount at Radhe’s residence from where the recovery was made yesterday, before the former’s arrest near Tanda.

The VB team also searched Kaler’s residence and found that several official files and records had been kept there in a parallel office set-up that he had created. Consequently, an FIR has been registered under Sections 120B and 420 of the IPC and Sections 7 and 7A of the Prevention of Corruption Act against Kaler and 10 private agents operating in his office at the VB police station. Kaler and agent Rampal have been arrested.

The SSP said as per the rules of the Transport Department, all commercial vehicles had to obtain a fitness certificate from the RTA office to ply on roads, and these vehicles and their documents had to be physically inspected by the MVIs, who were mechanical engineers by qualification, in their offices. Revealing the modus operandi, the SSP said it had come to light that the officials in connivance with agents and middlemen were issuing fitness certificates without any physical verification of vehicles in lieu of heavy bribes in various districts. This way, some of the RTAs and MVIs were passing the vehicles only on the basis of documents without any physical inspection.

The SSP said further probe in these cases was underway and strict action as per law would be initiated if anyone was found guilty.

On the basis of complaints regarding irregularities and corruption in some RTA offices, the VB conducted surprise checks at the MVI offices in seven locations, including Amritsar, Jalandhar and Hoshiarpur, in the state. — Diljinder S Dhillon, SSP, vigilance bureau, Jalandhar