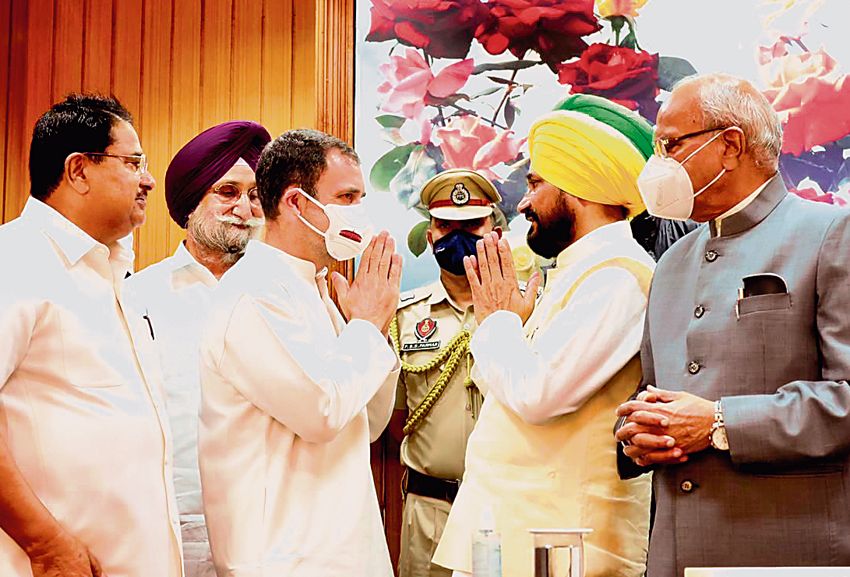 A strong footprint of Navjot Singh Sidhu in running the affairs of the Punjab Congress and state government is clearly visible, if the last-minute replacement of six-time MLA from Patiala rural Brahm Mohindra with five-time Amritsar Central MLA OP Soni as one of the Deputy Chief Ministers is any indication.

Soni along with Sukhjinder Randhawa took oath as the Deputy CM during the swearing-in ceremony here today.

The development affirms growing hold of Sidhu in running the affairs of the Channi-led Congress government. While Randhawa had Sidhu’s stamp of approval, the latter played a key role in replacing Mohindra with Soni. Both Deputy CMs belong to the Majha region.

Sources said the PCC chief had a direct conflict with Mohindra, who took over as the Local Government Minister after Sidhu resigned from the Cabinet in 2019. Mohindra had been strongly supporting Capt Amarinder Singh against Sidhu.

Till last night, Mohindra, a Hindu face, had been sounded that he would be the Deputy CM. Merely one-and-a-half hour before the swearing-in ceremony, he was replaced with Soni at Sidhu’s bidding. Of late, Soni had been supporting Capt Amarinder Singh. The appointment of Soni indicates the high command wants to placate Captain Amarinder loyalists.

Another factor going in Soni’s favour was his little-known proximity to former PM Manmohan Singh who, sources said, had intervened to propose Soni’s name as a minister in the Punjab Government after the party won in 2017. Soni, initially left out of the Cabinet, was eventually included a year later.

“Soni is someone who would defend the Congress vociferously when Sidhu, as a BJP representative, mounted political offensives on the party. Soni is seen as a staunch loyalist. His appointment balances power equations within the party,” said a Congress leader privy to the development.

In the changing political equations after Captain Amarinder resigned to make way for Channi, the corridors of power are rife with reports that suggest the PCC chief pulled out all the stops to ensure a Dalit Sikh leader became the Chief Minister. It suited the aspirants of the CM post in the next Assembly elections.

Sidhu was reported to have been vehemently opposed to the consideration of Randhawa as the CM candidate and had instead batted for a Dalit Sikh to be given the coveted post. Sidhu finally prevailed upon the party leadership to get Channi as the CM.

It’s unfortunate that even before Channi was sworn in, the Congress put shackles on his feet. Channi’s appointment is a political card to woo Dalit voters. —Parminder Singh Dhindsa, SAD (sanyukt)

Channi should now order a thorough probe into the SC scholarship scam and punish the guilty. This way, he will do great service to Dalit youths. —Prem Singh Chandumajra, SAD

Capt Amarinder didn’t act against Dharamsot even after a principal secy-level officer found him guilty. Now, we expect Channi to take action against him. —Harpal Singh Cheema, AAP

Left with no option

It seems Channi was chosen as the Congress was left with no option. If the party is not confident about his leadership, why did they make him the CM for four months just before polls? —Ashwani Sharma, BJP

It’s an insult to Dalits if Channi is holding the seat for Sidhu, a staunch Gandhi loyalist. This undermines the Dalit empowerment narrative being peddled by Congress. Shame. —Amit Malviya, BJP