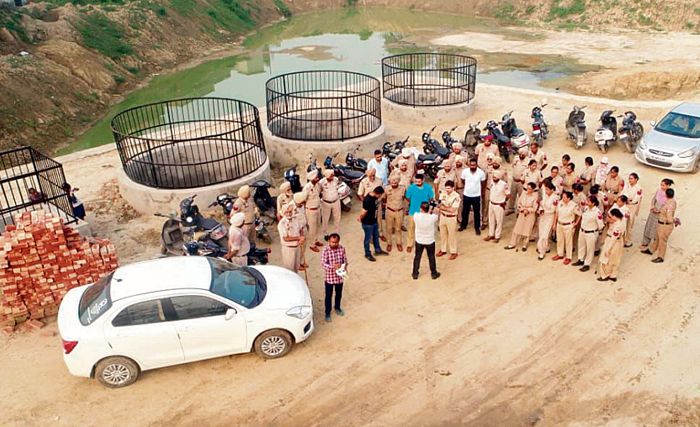 The police personnel at Samundgarh Chhana village on Thursday.

Infamous for drug smuggling, Samundgarh Chhana village in the district today witnessed an unprecedented surveillance through a drone for more than three hours.

Sources say the police received a tip-off about drug smuggling in the village. The Dhuri police led by Deputy Superintendent of Police (DSP) Yogesh Kumar, along with a posse of 125 police officials, set out for the village but, before entering Samundgarh Chhana, they pressed their drone into service from a distance.

At first, the villagers were confused on seeing the drone but, when they realised that this could be a ploy by the police to keep tabs on drug peddlers, they ran inside their homes, some in the homes of their neighbours, the sources say.

“There are 90 NDPS cases against residents of Samundgarh Chhana village. The drone helped the police identify persons, who tried to hide in neighbours’ homes. In all, 15 outsiders, who did not give a satisfactory reply when asked about their presence in the village, have been detained,” said the DSP.

Besides, the police have impounded 21 motorcycle and two cars, as residents failed to furnish documents of the vehicles.

“The police will ascertain whether or not the impounded vehicles were used in drug smuggling,” added the DSP.

In all, 90 NDPS cases are registered against residents of Samundgarh Chhana. The police detained 15 outsiders, who did not give a satisfactory reply about their presence in the village. Yogesh Kumar, Sangrur DSP