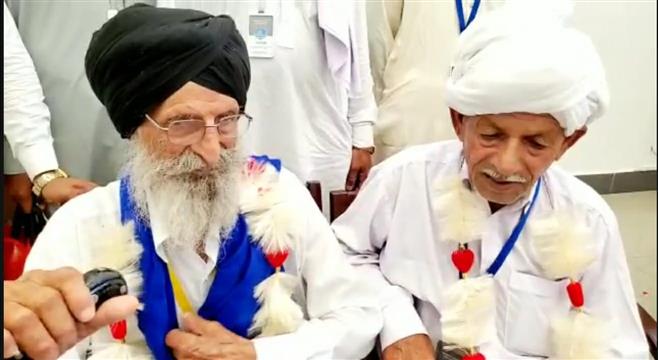 Sarwan Singh (in black turban) with Mohan Singh - who is now called Abdul Khaliq- at Kartarpur Sahib on Monday.

A year ago, Pakistan-based freelance journalist Javed Mohammad made a video of Mohan Singh (82) after visiting his home in Chak-37 village of Sahiwal district in Pakistan. Mohammad was shocked when he learnt that ever since Mohan Singh was separated from his family during the Partition he never had a chance to meet them.

On his part, Mohan Singh told Mohammad about his proximity to his uncle Sarwan Singh (95) who lives in Bhauddinpur, 25 km from Jalandhar district in Indian Punjab.

In the clip, Mohan Singh lamented how God had been unkind as he was born with a congenital defect. He showed Mohammad his duplicated thumb on his left hand and specifically asked him to videograph it.

The journalist never knew that one day his video clip would reunite a family whose members lived on both sides of the wire-meshing. And it was actually the much cursed duplicated thumb that acted as a medium in reuniting a family.

Sometime after Mohammad’s video hit the social media, an Indian YouTuber Harjit Singh Jadiala clicked a video -- ‘The Other Side of Freedom’-- in which he interviewed Sarwan Singh. In the clipping, Jadiala is seen asking the octogenarian if he knew of any identification mark with which his nephew could be traced. Sarwan immediately told the interviewer that his nephew had a “duplicated thumb on his left hand”.

Thousands of miles away in Australia, Gurdev Singh happened to see both the videos. He immediately contacted Javed Mohammad. Slowly, the pieces of the puzzle fell together. Sarwan Singh’s joy knew no bounds when he was told that his nephew Mohan Singh had been traced through his duplicated thumb.

After this meeting in cyberspace, the next logical step for the two families was to set up a real time family reunion. For this, the Kartarpur corridor came in handy.

It was decided that Sarwan Singh and Mohan Singh would meet at the Gurdwara located in Pakistan on August 8. Inaugurated in 2019, the passage, till yet, has enabled more than a hundred families to reignite long lost family ties.

Taranjit Kaur Hundal, one of Sarwan’s many grandchildren, says she, too, was to go to meet her uncle Mohan Singh at Kartarpur today. “However, my passport was days away from its expiry date. Hence the authorities did not allow me to travel. My mother Rashpal Kaur and a cousin Balbir Singh are accompanying Sarwan Singh,” she said.