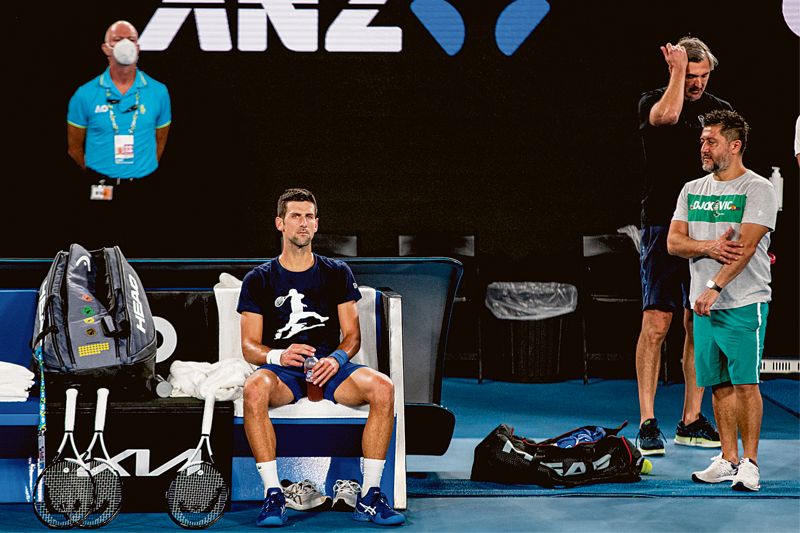 Novak Djokovic rests during a training session in Melbourne. Reuters

Unvaccinated tennis star Novak Djokovic today asked an Australian court to block his deportation ahead of the Australian Open after the government cancelled his visa for the second time over Covid-19 entry regulations.

The government ordered that Djokovic be returned to pre-deportation detention at 8 am Saturday, albeit with permission to meet his lawyers at their offices.

The world tennis No. 1, bidding for a record 21st Grand Slam trophy in defending his Australian title, had been told on arrival on January 5 that his visa, granted on the basis of a medical exemption from a vaccination requirement for visitors, was invalid. The 34-year-old Serbian spent several days in immigration detention, in a hotel also used for asylum-seekers, before that decision was revoked on procedural grounds.

Hawke said today he had “exercised my power under Section 133C(3) of the Migration Act to cancel the visa held by Mr Novak Djokovic on health and good order grounds, on the basis that it was in the public interest to do so”. Under Section 133C, Djokovic would not be able to secure a visa to Australia for three years, except in compelling circumstances.

Judge Anthony Kelly said the government had agreed not to deport Djokovic before the case concluded. The player’s legal team said Hawke had argued that allowing Djokovic to stay would excite anti-vaccination sentiment.

Although Djokovic has publicly opposed compulsory vaccination, he has not campaigned against vaccination in general, and his lawyers called Hawke’s decision “patently irrational”. They said they hoped their challenge could be heard by Sunday, the day before the tournament starts. — Agencies