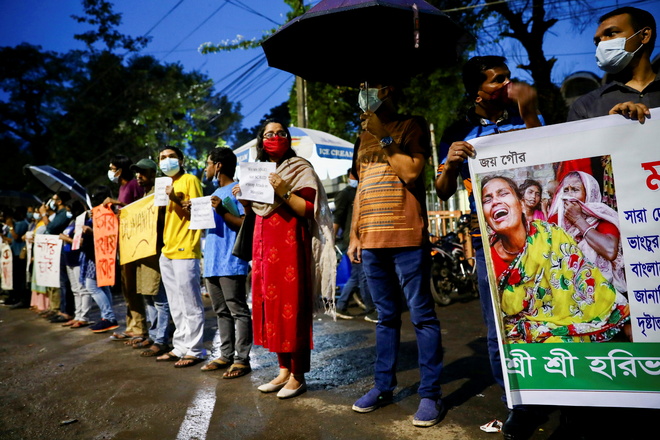 Activists seek justice for victims of violence in Dhaka. Reuters

Bangladesh Prime Minister Sheikh Hasina on Tuesday instructed her home minister to initiate immediate action against those who incited violence using religion, as she asked people not to trust anything on social media without fact-checking.

Attacks on Hindu temples have intensified in Bangladesh since last Wednesday after an alleged blasphemous post surfaced on social media during the Durga Puja celebrations. Late Sunday night, a mob damaged 66 houses and set on fire at least 20 homes of Hindus in Bangladesh. During the weekly Cabinet meeting on Tuesday, Hasina instructed Home Minister Asaduzzaman Khan to initiate immediate action against those who incited violence using religion, Cabinet Secretary Khandker Anwarul Islam was quoted as saying by a daily.

PM Hasina, who joined the meeting through video-conferencing from her official residence, also urged the people of the country not to trust anything on social media without checking facts, he said.

She has instructed the Home Ministry to remain vigilant and take steps to prevent such incidents from recurring, Islam said. Local media reported that six Hindus were killed in separate attacks, but the figures could not confirmed independently.

Hasina has promised to bring to justice the perpetrators of recent violence. She has announced to provide all possible assistance to the affected families. The foreign ministry statement underlined that the Government of Bangladesh “unequivocally condemned those incidents and took serious note of the reactions from within and outside the Hindu community”. Regrettably, it said, the domestic elements that opposed Bangladesh's independence from Pakistan were still propagating their "toxic narratives to instigate violence, hatred and bigotry". — PTI